What a fresh morning that was! All the tiredness from yesterday’s Trek to Deoria Tal had vanished. It felt like I was never tired and this is my home. No worries no plans no mobile no network, just nature and I.

But then, today’s plan was to reach Rishikesh and handover bike to Ashok Ji 🙂 Followed by local sightseeing in Rishikesh and attend Ganga aarti in Haridwar. 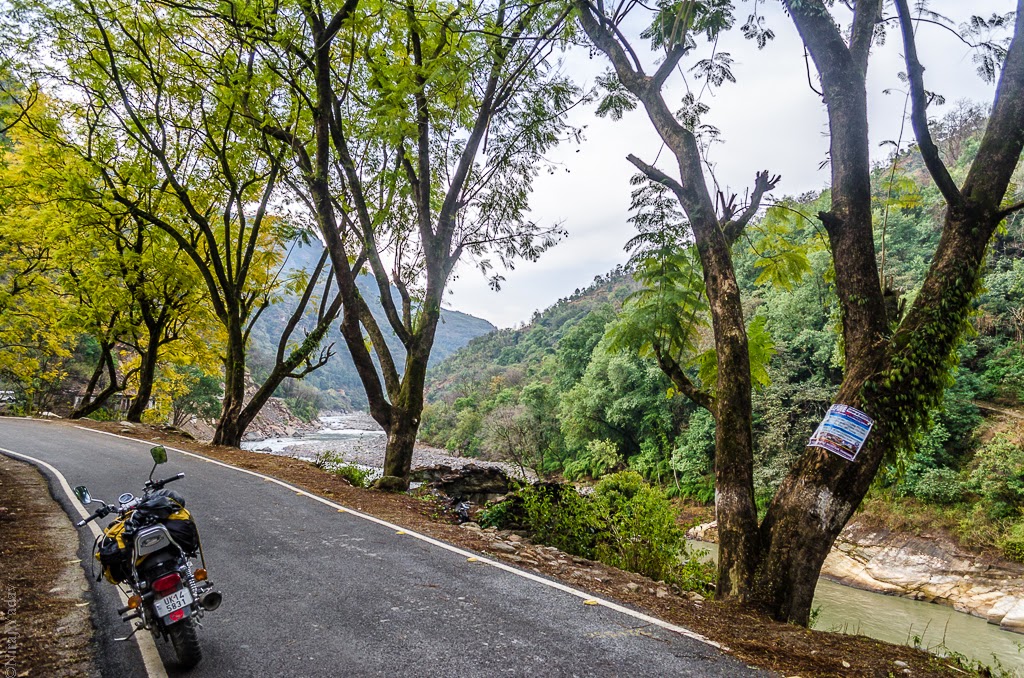 Did my lunch at the same place in Srinagar. This time, it was Rajma Chawal. They were happy to see me again and asked if my journey was good.

Ukhimath to Rishikesh was around 182km. As I always say returning is always quick. I was aware for the first 20-30 kilometres later everything switches to Auto Pilot mode.

When the time ceases to exist we tend to enjoy things the most. The journey was so involving I didn’t remember when I reached Laxman Jhula. Placed my luggage at Mountain Fox Adventure.

I roughly had 5 hours in the Rishikesh. I didn’t had any fix list for Rishikesh but had thought of seeing Laxman Jhula, renowned Parmarth Niketan Ashram, Swarg Ashram, Beatles Ashram and Ganga aarti. 5 hours were enough for all these.

Creeping through the lanes of Rishikesh on the bike, I reached Laxman Jhula in 5 minutes. Laxman Jhula is a narrow suspension bridge usually filled with tourists and locals crossing the river. People use Ram Jhula as well to cross which is little down the river.

I was surprised that bikes were allowed on that narrow bridge. Honking and moving slowly I crossed the Laxman Jhula. Went to Parmarth Niketan Ashram first, but didn’t know what to do here. So just took note of the things and moved to Swarg Ashram. Repeated the same in Swarg Ashram 🙂

While returning from Swarg Ashram, I spotted a beautiful ghat in front of Gita Bhawan. It was tempting. Although it was a bright sunny day, I didn’t mind walking on the hot floor of the ghat and sitting on the lowest stair next to Ganga. 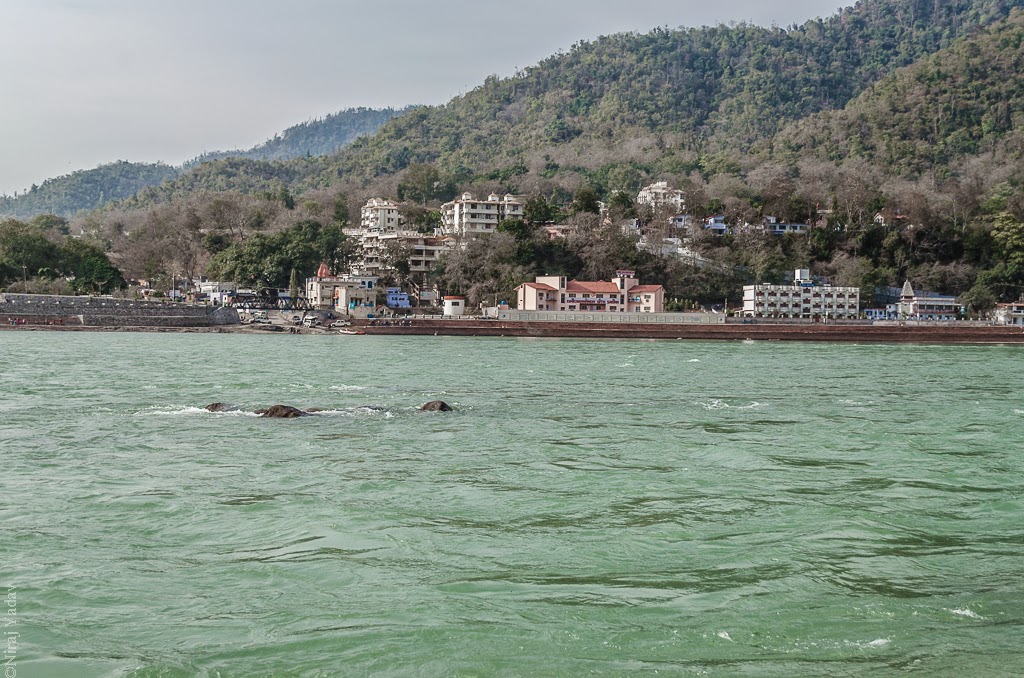 The scene was heavenly. Ganga was very fast here. Faster than what I saw elsewhere. Water was clear and greenish.

My eyes were stuck in the midst of the river over the sunshine and I was lost in thoughts. I didn’t know when 2 hours passed.

Started my bike towards the last one in the list.

Maharishi Mahesh Yogi ashram or Beatles Ashram it is known popularly is not easy to locate. I did may to and fro in search of the Ashram. Later came to know that a kutcha road on the right-hand side goes to Beatles Ashram. Ashram gate is around 100 meters from the main road.

It was constructed in the 1960s later the area was declared part of Rajaji National Park and they had to close down the ashram. A fair amount of foreigners come to this place wishing to see the place where the Beatles stayed and composed.

Parked my bike in front of a closed metal gate. Inside the gate, a 50-55-year-old man in kurta was talking with a foreigner. I called that man and said I want to see the Ashram. From no angle, that place seemed to be an ashram it was just fallen structures amidst the jungle. He said its 5 PM and it’s closed.

I said I have come a long way to see this. Finally, I was able to convince him. He took my driving license and said go carefully its jungle on the other side with no boundary walls. I said Ok and went inside. The place was already getting dark.

A stoned footpath leads to the main compound or courtyard. I noticed a tiny bird very fast and restless. Wasted my 10 minutes to capture it in-camera. 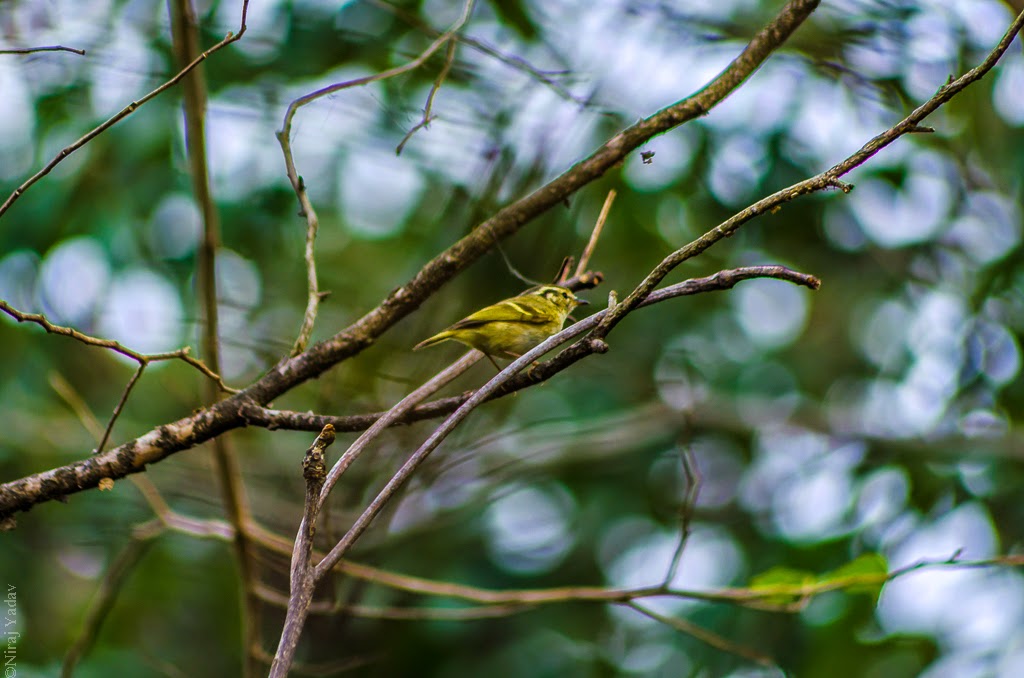 It was such a restless bird, getting a snap of it certainly needed patience.

The Beatles Ashram had around 130 concrete Kuti equipped with air conditioners and public address system. Once the meditators went inside the Kuti they locked themselves and meditated in seclusion. Beatles too did this.

The place seemed poorly maintained. Creepers covered the building walls. Doors and windows were broken. Since I didn’t have a guide, it was just walls and doors for me.
I saw jungles starting so returned back. 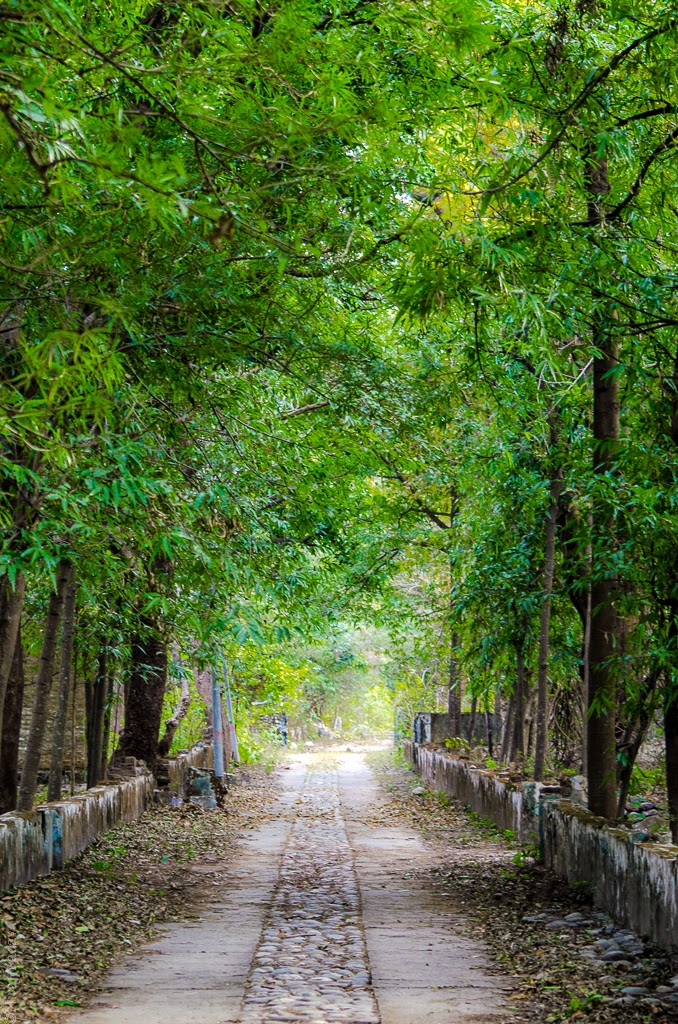 Walk path inside the Ashram. Going straight will lead to gates of Rajaji National Park 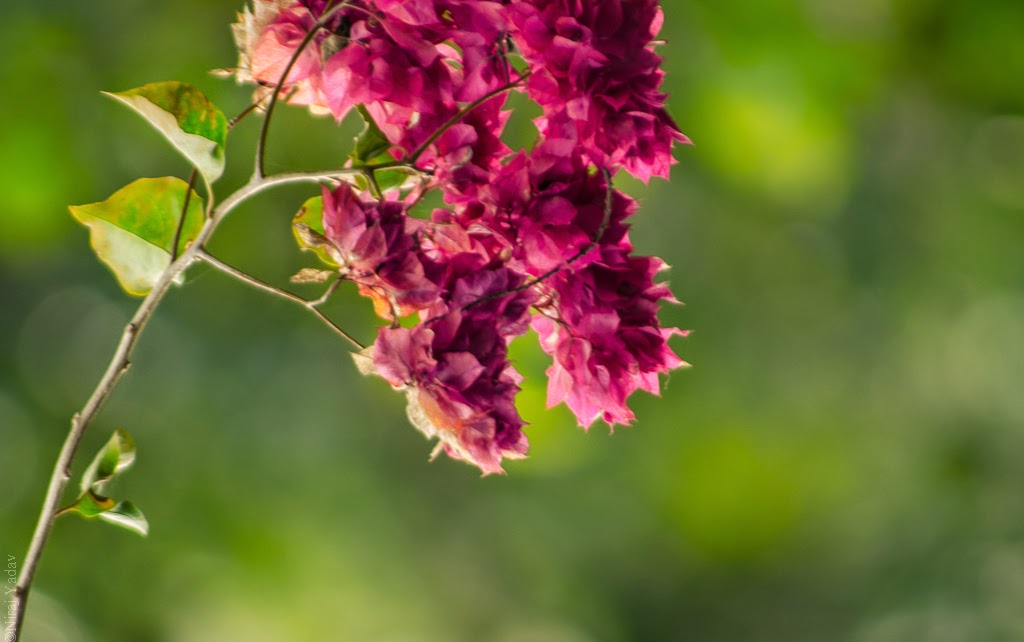 Flowers in the Ashram 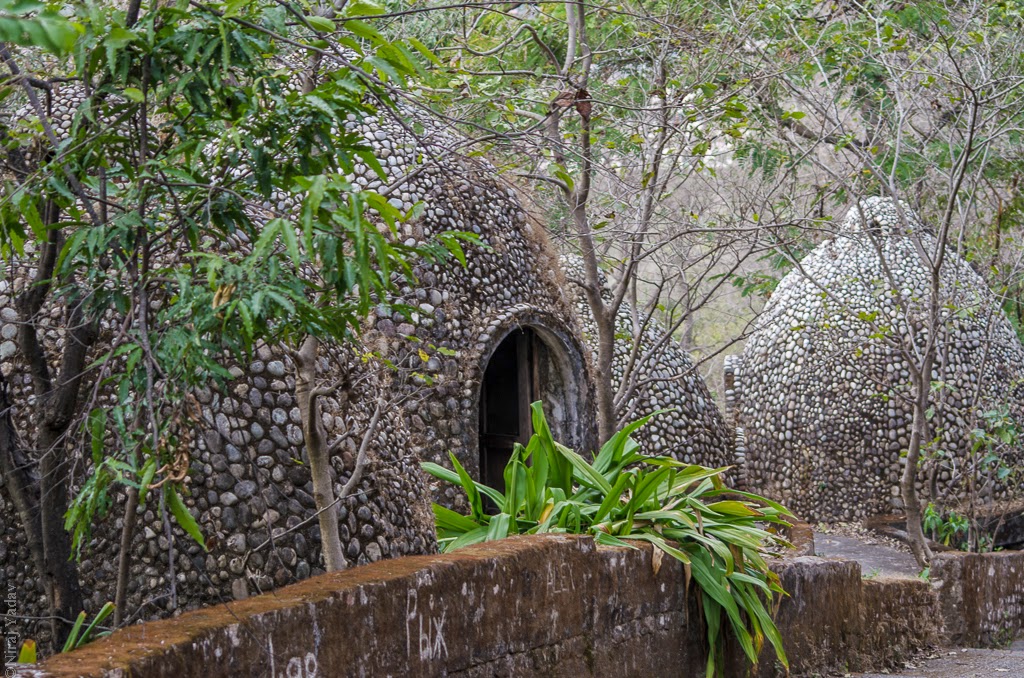 2 more old Sanyasis were sitting beside the man who took my DL.
Asked the man if I can have my DL back since I have to return Haridwar today itself.

He said sit we are not going to take your DL. After a basic introduction of each other, a good piece of conversation started. I remember the exact words. I said ‘मुझे आध्यात्मिकता के प्रति झुकाव है. योगियों को ढूंढने की कोशिश भी की मैंने’
No one said anything.
Then I asked two old Sanyasis ‘आप दोनों ने कब संयास लिया’
One of them who was preparing chilam spoke in a deep voice ‘अरे हमें तो चालीस हो गए’
I further spoke ‘आपने तो चालीस साल में काफी साधना की होगी और आपने सन्यास क्यों लिया’
Offering his chilam which I respectfully rejected he shared his story very briefly of how he retired from his life. Meanwhile, the man who took my DL returned and sat next to me keeping his left leg folded on his right thigh.
It was then, I noticed his elephant-like leg. He was rubbing his huge foot with right palm which only had 2 full fingers rest were half or less than that. It was getting dark and the scene seemed quite scary in the jungle.

I asked him how do they survive in extreme cold place like Badrinath in loin.
He replied ‘योग बाबूजी। बहोत शक्ति है इसमें पर मुस्किल भी है’। I said I know Pranayam. He said ‘ये सब नहीं कुण्डलिनी सुना है आपने।’
I nodded affirmative and name 3-4 chakra which I remembered.

I was fascinated and asked them did you people tried this. He said ‘हमने हर घाट का पानी पिया है’ But I knew he was lying. A yogi cannot have chilam in his hand but I remained silent and continued listening to him.

In the end, I came to know that the other two sannyasis were disciples of Mahesh Yogi. They showed me some real photographs of the ashram, Beatles and Mahesh Yogi with themselves. I was getting desperate to leave, asked for my DL, handed that man 30 rupees, took my bike and rode back to another side of Laxman Jhula.

While returning I went to German bakery which didn’t stand to my expectation.
Handed my bike to Mountain Fox Adventure and left for Haridwar.

Shared tempos are available, but I took a private one for Rs.100 as I had to catch the bus from Rishikesh bus stop as soon as possible. 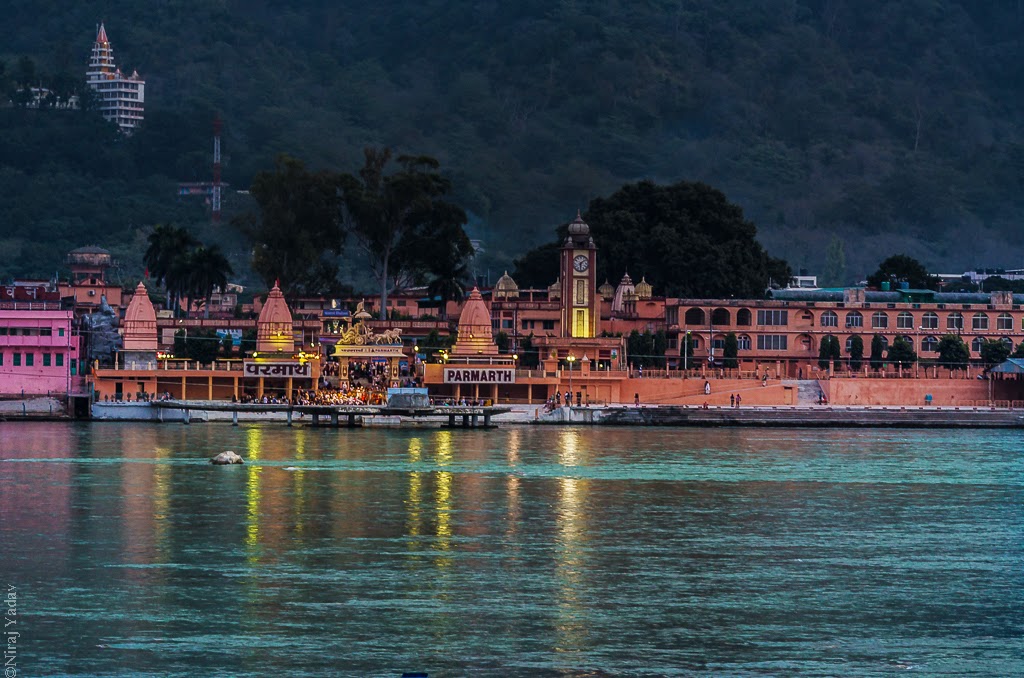 Some photos from Haridwar 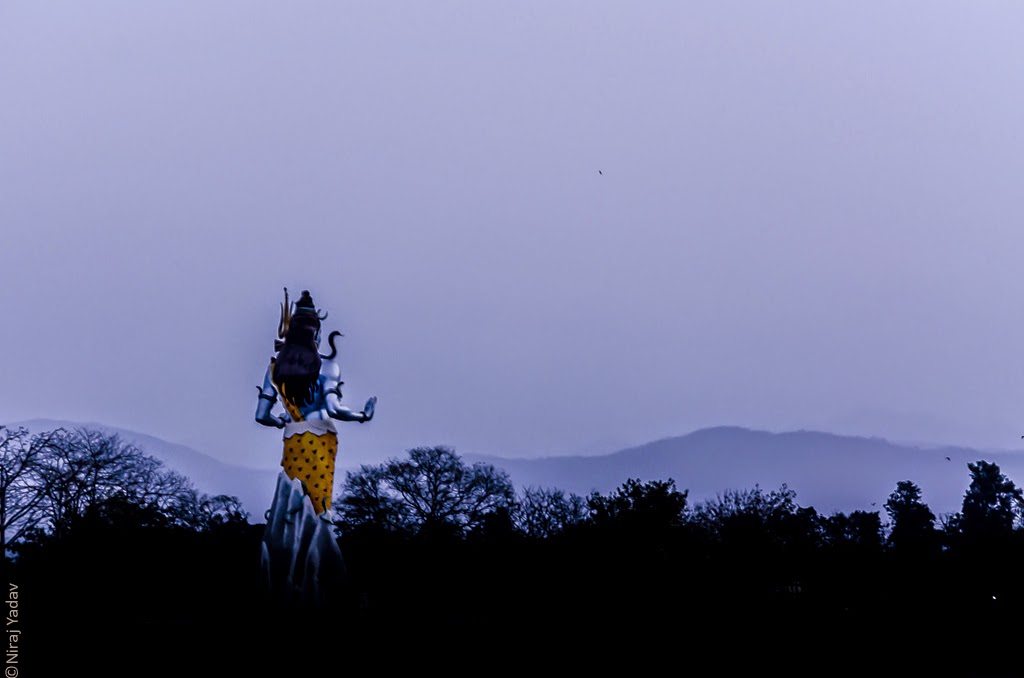 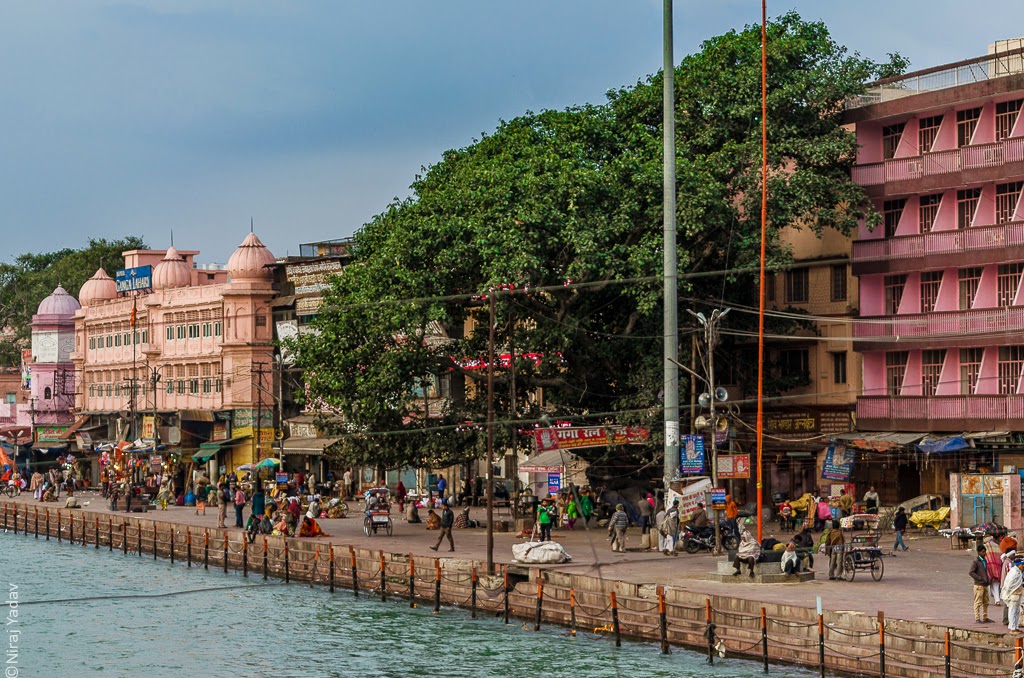 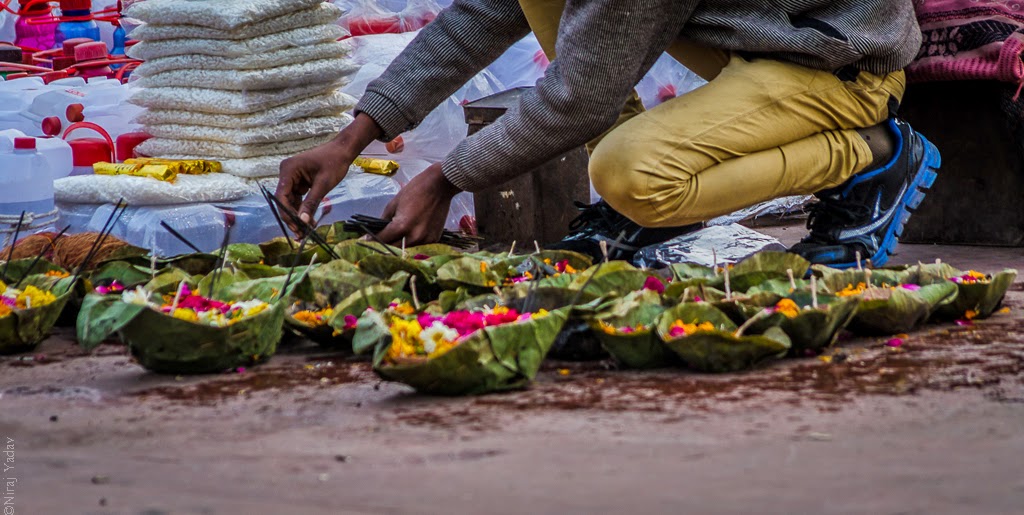 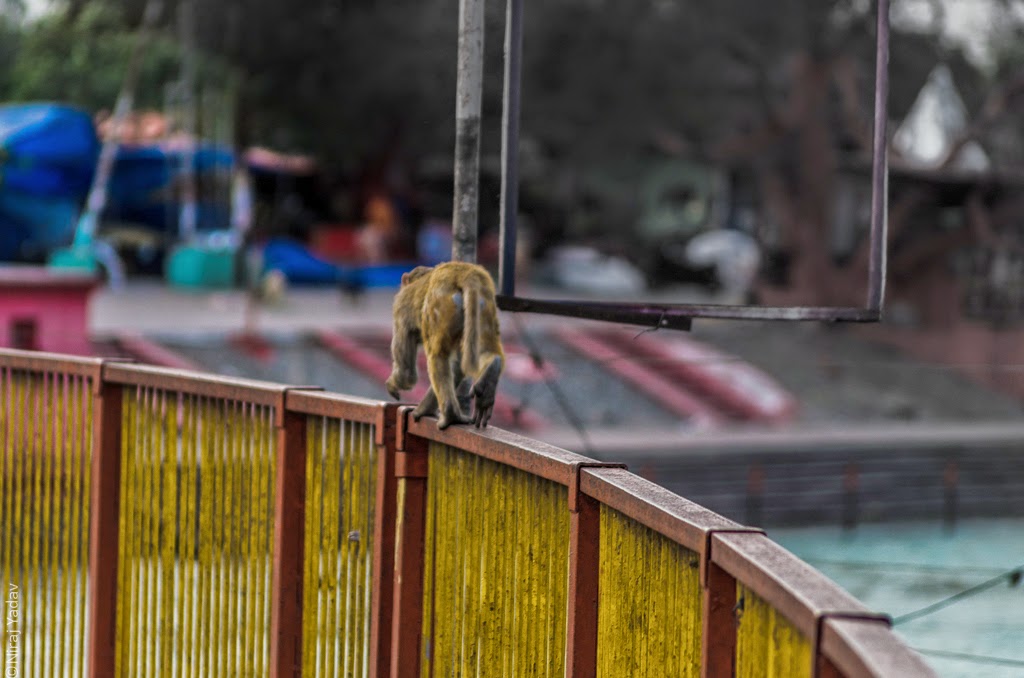 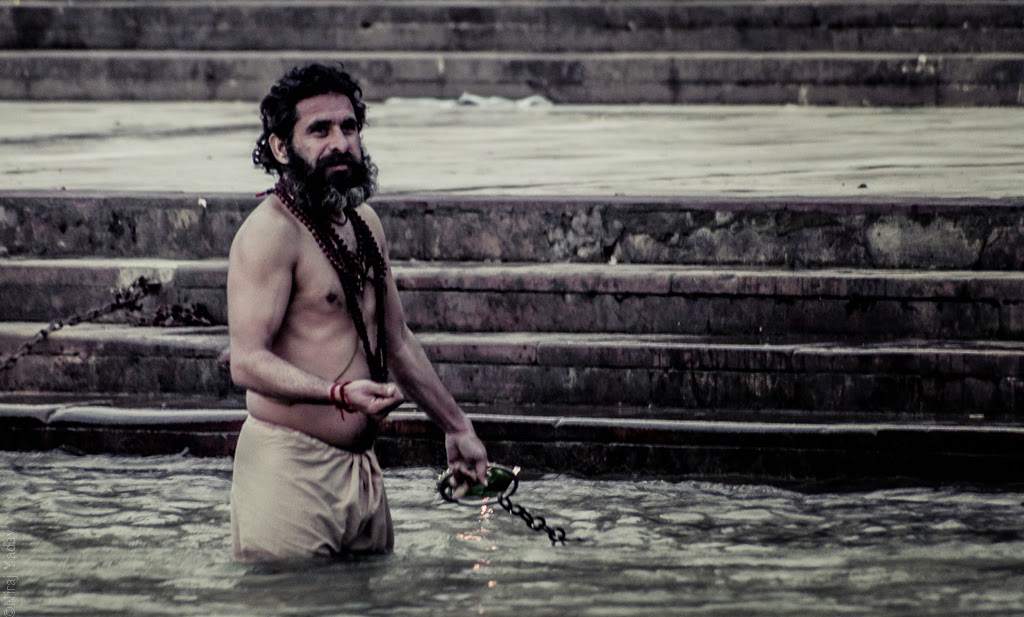 Maa Ganga passes through Har Ki Pauri through a relatively narrow area which increases the current. Chains like these facilitate the Devotees to worship and make dubki safely. 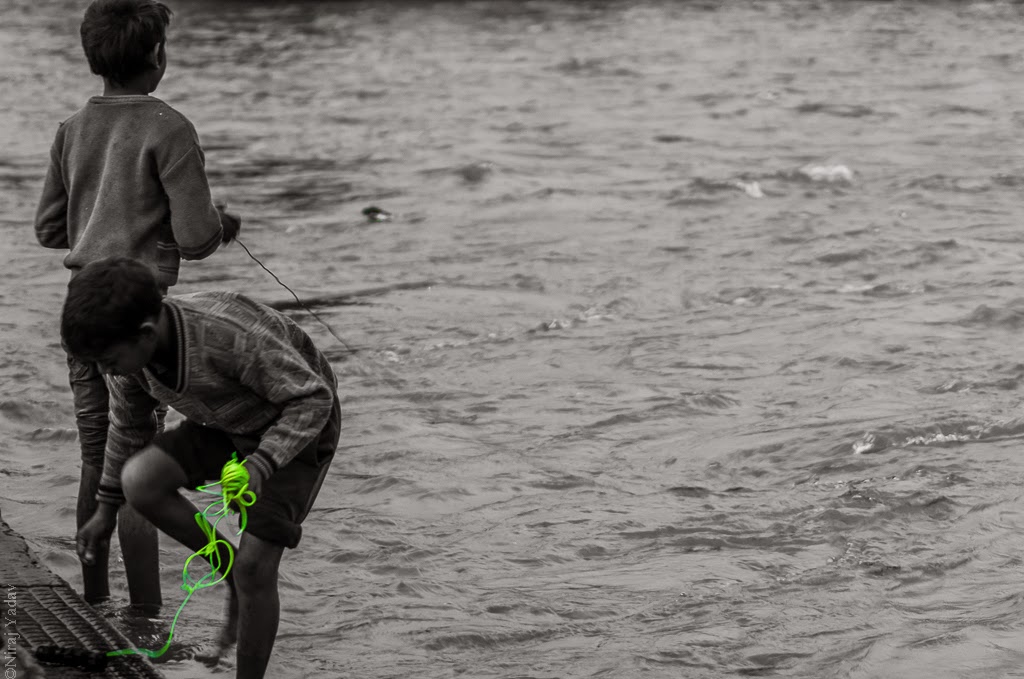 Thank you for reading my travelogue. Hope you all liked it. Email me at budgetyatri@gmail.com for any information.
Was this post helpful