What happened on 16 July 2013 in Uttarakhand are still fresh in our minds. Thousands of lives lost and millions of property perished. Destruction was the consequence of unchecked construction of hotels and houses next to river beds. Nature knows balancing itself. Unfortunately, the innocents suffered the most.
But the question is did we handled the situation well ?
No. People are scared of returning. They fear that they could have been one of the unidentified dead bodies. They could have been one of the families having no clue whether they should consider their parents dead or not.
I know sitting at home and talking is easy than being present at the scene. But, Yes we could minimized the losses if we had an fair system monitoring the pilgrims and disaster management plan implemented.
After analyzing how things went from bad to worst, broadly two things come into picture
First point is that the government didnt had any information of the number of pilgrims on char dham yatra.
Pilgrims were the biggest victims of the calamity. Although government figure estimates close to 5700 deaths, the number is feared to be much higher.
Many lost their lives due to the poor rescue operations. Had the disaster management were in good shape the agony and pains would have been much small.
There is no regulation on the flow of tourists and pilgrims. Government had no idea how many were there in Gangotri, Yamunotri, Kedarnath and Badrinath.
Secondly, they could not establish any channel to dissipate information regarding temporary shelters, relief camps and emergency situations to the pilgrims and tourists. This created panic and panic is the worst thing during calamities and emergency situations.
It creates an environment of fear and hopelessness. This is what happened with there. Nobody knew what to do next. They didn’t knew if there was any medical camp nearby or temporary shelters or food availability. They were trapped amidst dead bodies and crying survivors with no idea if they had any chances of living.
Now, where does the #DigitalIndia comes into picture.  We know Digital India aims at providing connectivity across nation as well as improving the digital literacy.
Considering its implementation is disciplined, in such a case not only it can handle situations like 2013 but has the potential to greatly reduce the problems faced by pilgrims and tourists on Char Dham Yatra.
Author proposes a system which integrates different departments of government and shares information related to weather forecast, road conditions, crowd density, accommodation availability and other relevant information.

The structure of Digital India:

1.Travel operators and individuals has to register themselves before embarking on yatra.
Process has to simple yet relevant information like pilgrims detail and their estimated halts has to captured.
2.Software should display the range of dates to the pilgrim along with the density of pilgrims on that date. This will give pilgrims to select dates with less density and may prevent overcrowding on a particular day. 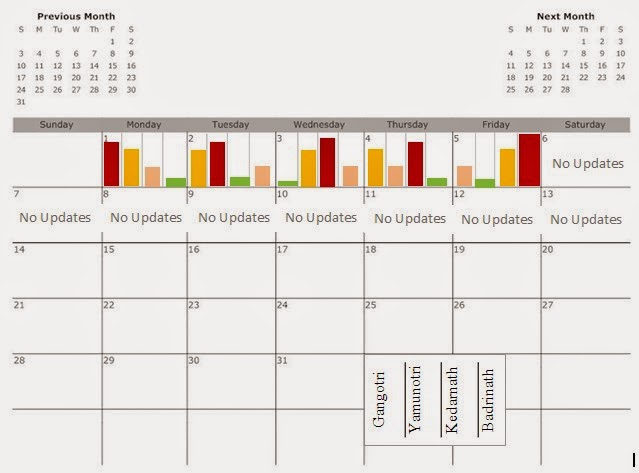 Abstract representation of point 2
3.Information regularly updated by different department of governments like Tourism and Catering, Healthcare, Roads and Highway should be displayed in presentable format to the visitors.
This will make them aware of the presence of basic necessities   in between their routes. This can lessen the panic n case of emergency.
4.In case of emergency, authorities can prepare a crisis mapping chart by pulling information from registrations and public sources. Google crisis mapping <https://google.org/crisismap/weather_and_events> could be used.
This will help the authorities to prepare targeted evacuation plan and necessity disbursement by building up ‘situation reports’.

Abstract representation of point 4
5.Weather forecasts and road alerts on the go may help reschedule and reroute yatra plan. This will save unncesessary chokings at some places.
6.Software embedded with emergency numbers and action plan can obviously help not all but few thus providing much needed support.
Was this post helpful