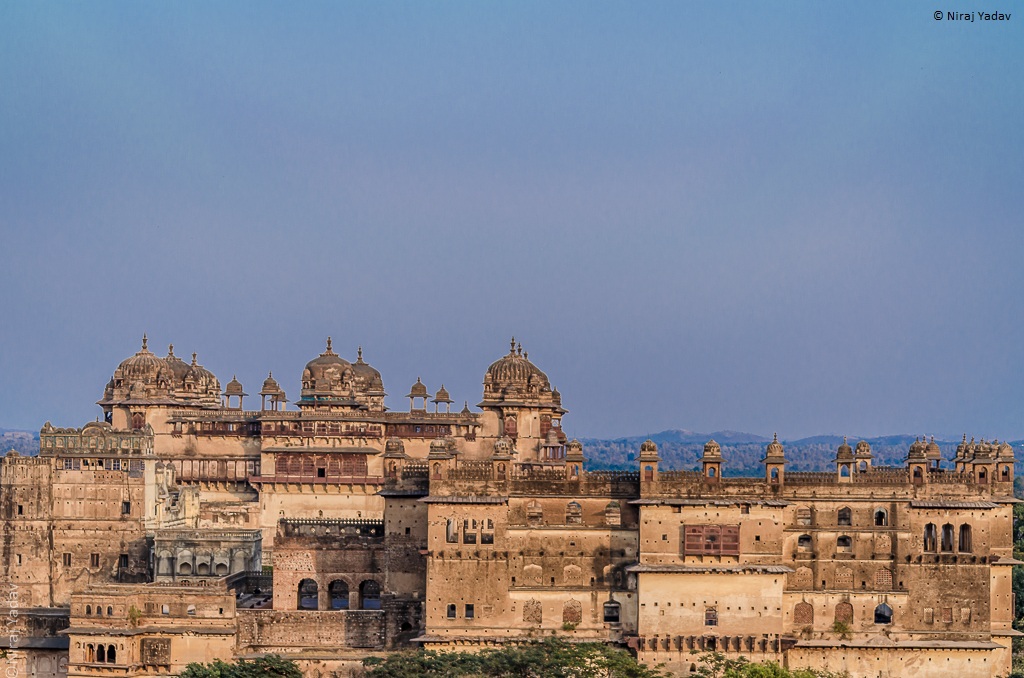 I am sure Orchha and Jhansi series travel blogs have been refreshing for you. If you haven’t read them, here is the link  Betwa riverside, Jhansi Fort. The Orchha Palace commands a very strong connection with history. Let’s take a small refreshing dive in the past.

Vir Singh Deo was one of the finest Rajput rulers of Bundelkhand particularly Orchha province. A contemporary of Akbar, Vir Sing Deo kept raising his voice against the Mughal despotism. To hold back the uprising, Akbar sent his son Jahangir with a sizable army towards Orchha which was the nucleus of rebellion.

Vir Singh Deo lost the battle and had to surrender to Jahangir. The palace erected by Vir Singh Deo on the banks of River Betwa became Jahangir Palace or Jahangir Mahal.

The legacy of Jujhar Singh

But the story doesn’t end there. Jujhar Singh, the son of Vir Singh Deo secured the freedom of Orchha from the Mughals. Later, cruel Aurangzeb invaded Orchha. Jujhar Singh had to escape.

His female family members were taken as war bounty by Aurangzeb and his two sons were converted to Islam. Jujhar Singh’s third son was murdered after he denied converting to Islam. Aurangzeb converted the royal palace in Orchha into Mosque.

That’s all with the history of Orchha Mahal. Let’s begin with my account from Orchha.

As I have mentioned in an earlier post that I was in Jhansi to attend my friend’s wedding. Utilizing this opportunity, I along with my other 3 friends planned for Orchha visit. We took an auto-rickshaw from Jhansi Elite Circle to Orchha, Madhya Pradesh.

Reached the place and sat in a small restaurant on the right-hand side of the road, just before the stone bridge which leads to Orchha Mahal.

Aloo Paratha, Gobi Paratha, Paneer Paratha, Lasoon Paratha any of them. If Yes. Then the last restaurant in the building towards Orchha Mahal is the place for you. I bet you will like all of them! And yes do not forget to ask the restaurant man for Baingan chatni 🙂

We ate like we were hungry for months. The lunch seemed never ending. Nobody was willing to stop. In fact, when the boy mistakenly brought two parathas which we hadn’t ordered, we made sure he doesn’t take it back. Very few places in India serve such delicious and easy on pocket Parathas.

Finished with the lunch, we moved ahead and crossed the stone bridge to reach the entrance of the Orchha Palace. Took four tickets for us and one ticket of Rs. 50 for Camera.

The palace is huge and grand with hanging balconies and gardens. A spectacular view of the river Betwa can be seen from the terrace of the place. The palace is decorated with lots and lots of windows and symmetrical architectures.

Orchha Palace as seen from outside

It took nearly 2 hours to complete the sightseeing of two sections of Orchha Mahal before returning to the main market.

Read: Auli in Uttarakhand has an artificial lake at 7500 feet. The lake water is used to create artificial snow and spray on Auli Ski slope. Click the link to read more about Auli.

I am eager to listen to your feedback. Use the comment box or Email me at budgetyatri@gmail.com