Konkan has always fascinated me with its soul-soothing coconut gardens and pristine beaches. Bike trip to Konkan was certainly something I wished to do.

Some 20 days before the trip, as usual, I was going through travel and biking forums when my eyes got stuck on a word  ‘Sagari Mahamarg’. To me, it sounded like a fiction word. It was making me restless.

Next day in office I went through the list of national holidays. Got my leaves approved for the long weekend in October. Initially, the Konkan Darshan was a solo for me but later my friend joined me.

Luckily this was the most beautiful part of the tour. None of the Jetty made us wait.  Just as we used to do during Engg days, figured out the routes and halting stops in the last week very loosely.

This becomes quite difficult when you struggle between the time you have and locations to explore. I started several times but left the job hanging as things didn’t balance out well.

As the route was through Sagari Mahamarg or the Coastal sea route, I saw multiple creeks lying en route. There were two options, one to bypass the creek and take a longer road around it. Second, check if ferry services are available and their timings.

In total from Dapoli to Goa, there were around 3 creeks. Availability and timing of ferry were my only concern. But I didn’t want to escape them either 🙂

Fixed my expired insurance and PUC
I had lost my visor for the open face helmet.
Struggled getting a visor for it. Finally, a road seller fixed the helmet for Rs.250.
Got the bike serviced.

For me, the week before the tour gets filled up with multiple feelings. First three days of the last week, excitement goes on rising. From the fourth day feeling to avoid the trip starts building up. It takes a good amount of struggle to start the tour. Hope I am not alone but some of you may have surely experienced this !!

Vishwanath was to reach Bhayandar station at 5:30 AM. We started at the right time. Filled 10-liter Petrol and continued. 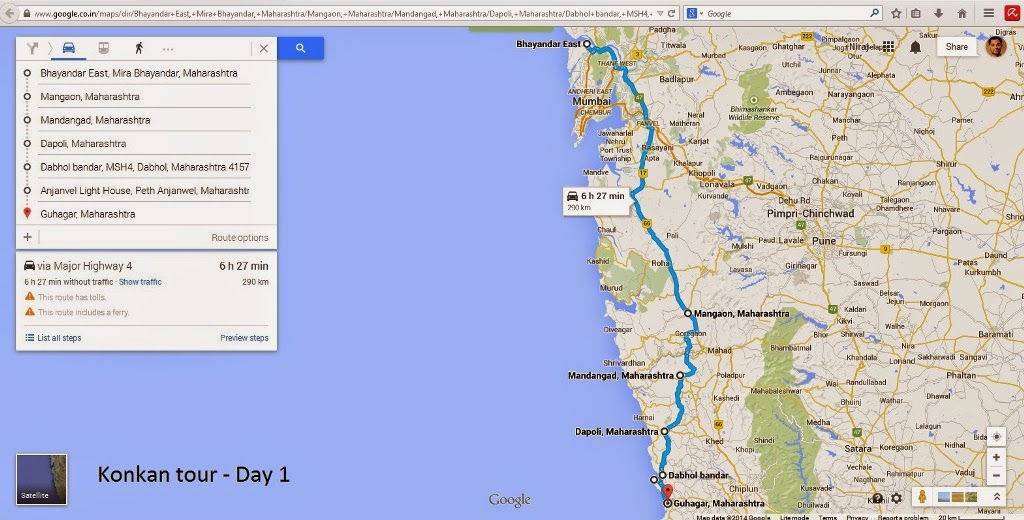 The day started heating and we could feel the heat after Panvel and it was just around 9 AM.

A regular traffic of heavy vehicles was there till Vadhkal Naka.
Naka is small enough to get misled. The straight road goes to Alibag and the left turn takes you on the Bombay-Goa Highway.

Took our first halt at Mangaon for quick breakfast.

From Mangaon, rode another 10 km on the Bombay-Goa highway before taking right for Mandangad.

The route is scenic with beautiful Savitri river flowing by the road.

There is an Indian Oil petrol pump just before Hingaloli if you are low on fuel.

Starting from Lonere to Dabhol the whole section is Ghat road with plenty of curves. A wonderful road to ride on.

Loved by readers: Nandi Hills: A mountain so close to heaven

From Dapoli continued towards Dabhol.  This stretch of the road was worst in the whole trip.

Just as we reached Dabhol bandar a ferry was about to leave.

Quickly bought tickets and parked the bike in the ferry.
Ferry tickets were cheap than we had imagined. It was Rs.20/person and Rs.30 for two wheeler.

The ferry takes you to the other side of the Vasistha river on Dabhol jetty.

Some photos from and near Dabhol jetty

Spent some time photographing near jetty and then left for the beautiful Anjanvel lighthouse.

If you liked it, comment below and shower your love on me 🙂

10 essential Dubai travel tips to help you make the most of...