Auli Ski Resort is a wonderful Skiing location in the state of Uttarakhand in India. The snow-white Ski slopes of Auli and Skiboarders were waiting eagerly for my appearance 🙂

I was staying in the dormitory of GMVN in Joshimath. The distance between the Auli Ski Slope and the small town of Joshimath is not more than 15 Kilometer.

Yesterday’s bike ride from GMVN Gopeshwar to Lambhgadh near Badrinath and back to Joshimath was exciting and fabulous, but it had drained all my energy. I was the only soul in the GMVN dormitory of 10 beds.

The freezing night was in its last phase. The winter morning made sure to keep me underneath two woollen blankets apart from body thermals.

Mind it winters in Uttarakhand are really cold. Checked my mobile it was around 7 AM in the morning. I could see the dawn breaking from the GMVN window.

Chirping of the birds, soft footsteps of the waiters in the corridor, men with sweater and muffler pushing the bicycle pedal hard on the hilly road broke a big smile on my lips.

I wish I could be the eternal element of the beautiful mountain morning scene. 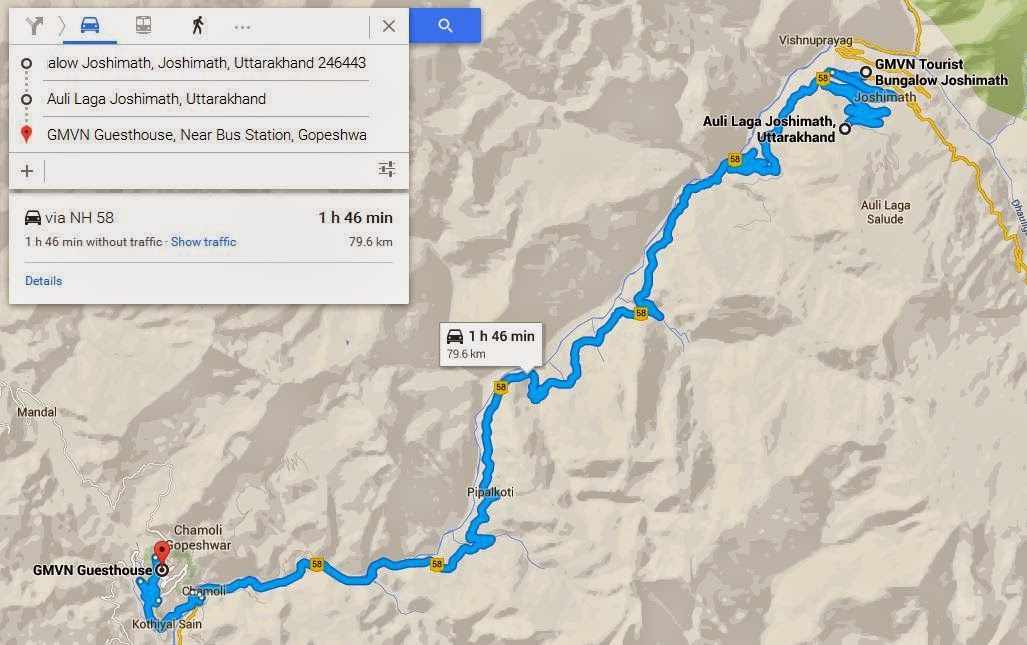 I had planned to return to Joshimath by 2:30 PM and proceed to Gopeshwar. On the way to Auli from Joshimath, I was expecting black ice on the route and the assumption was right.

Geared myself, took my camera and with one push Bajaj Avenger started. I was surprised since the night was super chilly and the bike was parked outside in open.

The first 5 km was good except the chilly wind which made my fingers numb. The scene started changing. I could see shining snow-clad peaks and fresh snow on both sides of the road.

Suddenly I felt my Tyre skidding, it was black ice. I had read the horror of Black Ice hence slowed down to 20 kmph.

No car or motorcycle passed me till now. Snow on the road was increasing with every kilometre. I was around 5 kilometres behind Auli. A car came from behind and started honking. I was riding in the middle, I signalled to wait and moved slowly towards the right.

At the curve just ahead driver of the car applied the brake. Because of the ice on the road car didn’t slow down, it slid towards the right. I think the driver must have steered to make it straight. But the car again slipped towards the left, facing the valley. I thought Car will go down the valley. Luckily it escaped and went ahead. I hate drivers who hurry to their destination.

After a while, the wheels of my bike got stuck in almost a feet deep snow very close to Auli. I was at full throttle, but tyre just kept spinning in its place. My shoes were not fit for snow, as a result, I was not able to push my bike forward or back.

Then comes the rescue. Indo-Tibetan Border Police has their camp at Auli top. Military trucks fitted with big snow chains keep plying on this route.

A jawan jumped from the truck and lifted my bike from behind. He helped me clear that snow patch. Thanked them and moved ahead. 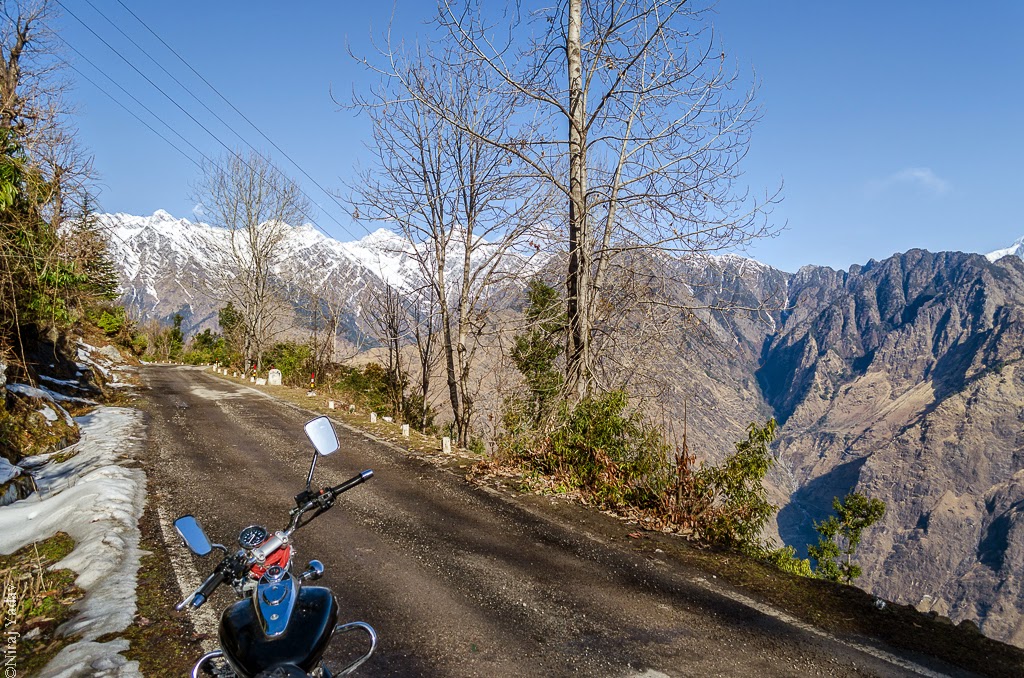 Joshimath to Auli in Winter 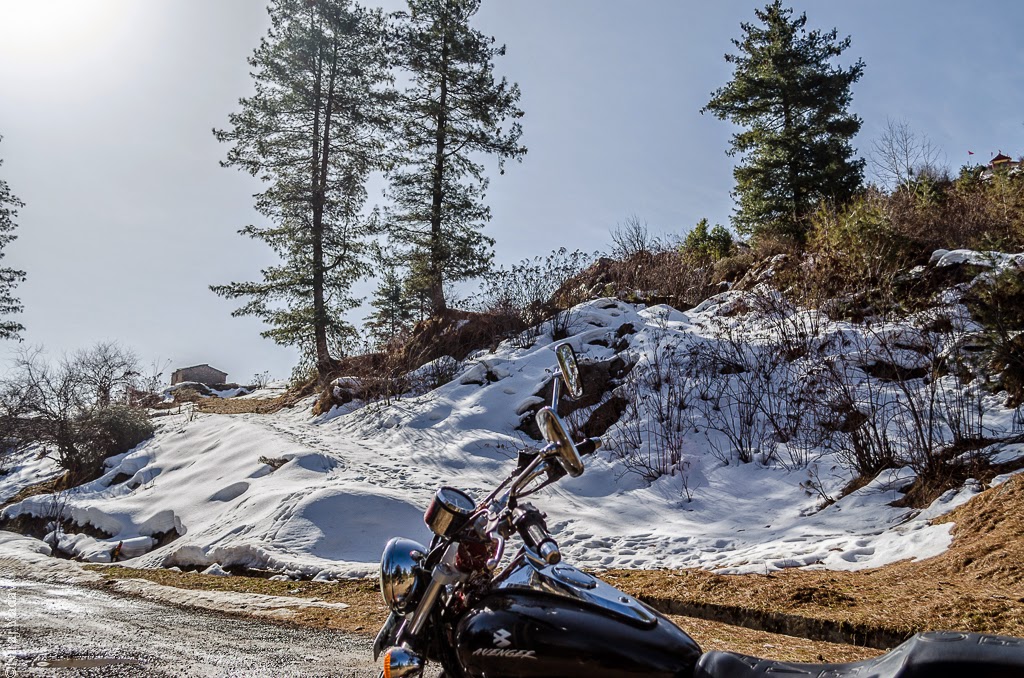 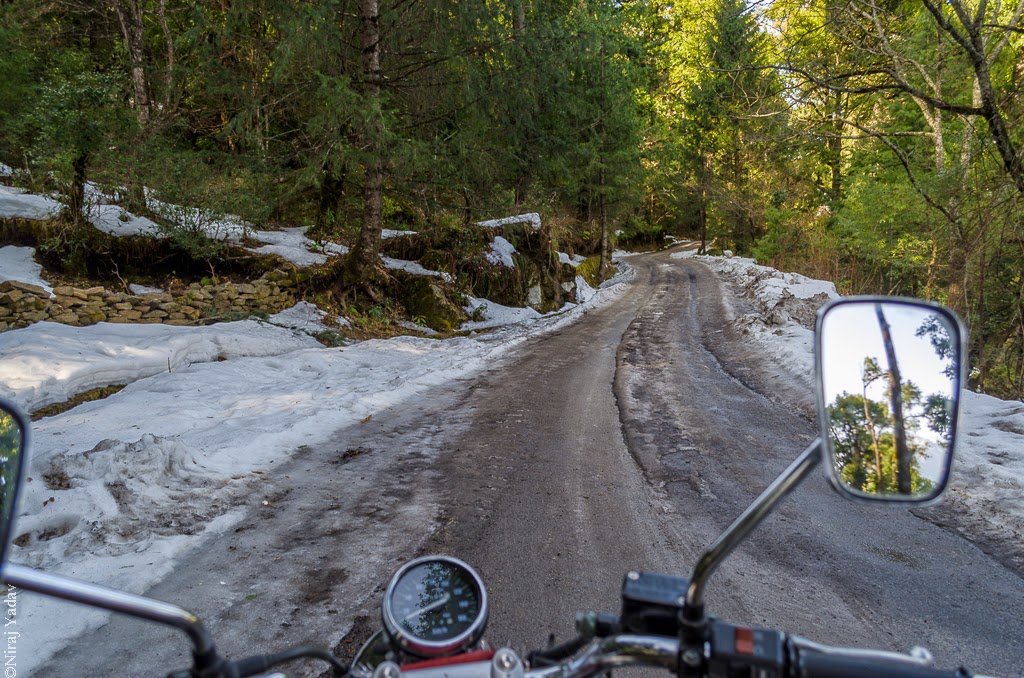 Joshimath to Auli. This route is not frequented by motorcyclists due to snow and black ice. People prefer four-wheelers or take ropeway from Joshimath directly to Auli 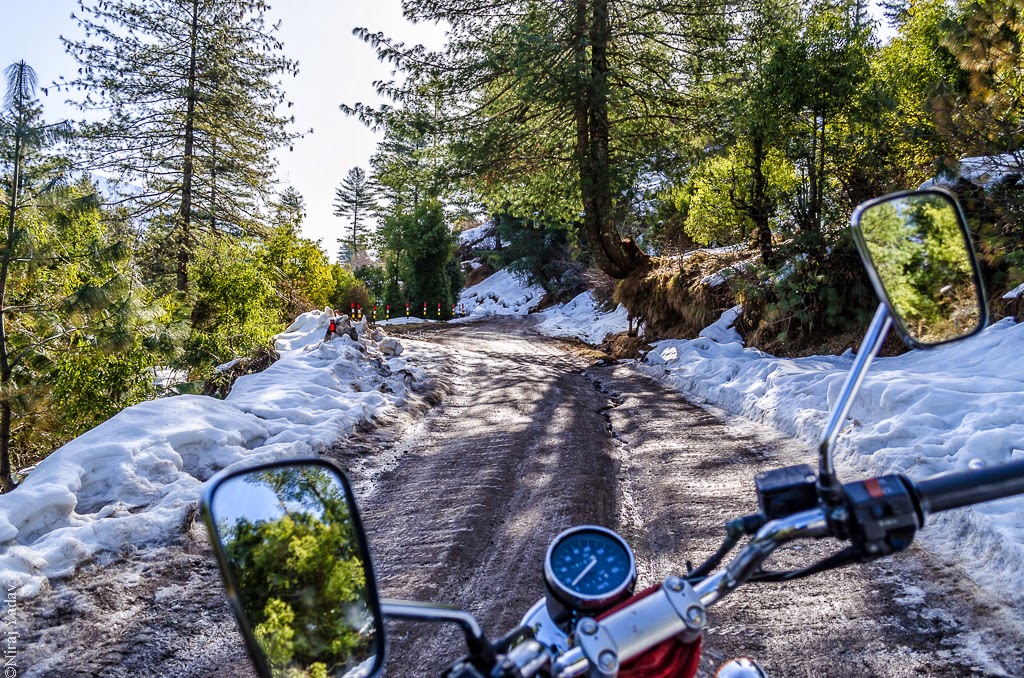 Joshimath – Auli road. As we approach Auli the scene gets mesmerizing.

Missed the right turn which goes towards Auli Ski resort and stumbled on a small shop on the left side of the road. After a cup of hot noodles and tea and inquired if can do Ski up there.

The owner of the shop is a nice guy. He informed me this year his brother who was in ITBP was representing India in Nordic Ski race.

The Ski competition was held up in Switzerland. His name is Deepak and he lived in the village down below. He said he can arrange a coach for Skiing. That’s good.

Settled the deal for Rs. 300. Cheap isn’t it? In 300, he will provide me with Skiing shoes, gloves, sticks and Ski. Also, a coach responsible for training me for 2 hours. I was super happy 🙂 He closed his shop and took me the Ski slope. 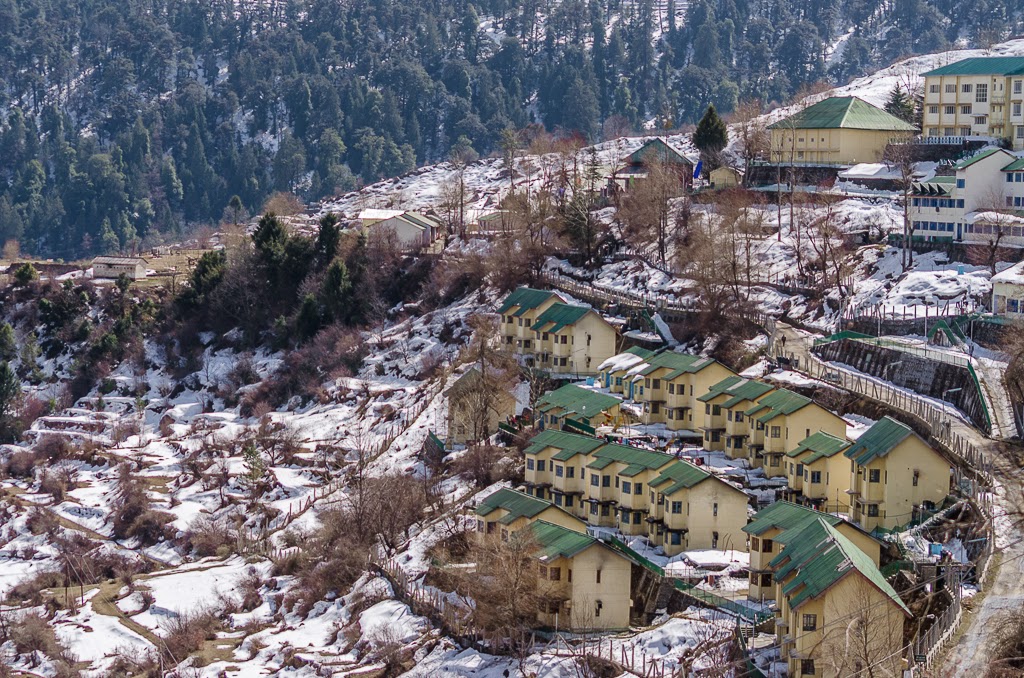 Auli village. This is where Deepak lives 🙂 Beautiful indeed

I was handed Ski shoes which were sturdy and tall. Coach asked me to get on the slope which was around 100 meters from there. Walking with Ski shoes requires a bit of practice.
Coach brought a pair of Ski, a pair of Ski sticks and a pair of Ski gloves. The first lesson was to stand with Ski.

Fell 2-3 times but learning was fun. After an hour of struggle, I was enjoying coming down the slope. Although it seems easy but Ski is exhausting. After 2 hours of practice, I said the coach that I wanted to leave.

Ski is not that easy 😛 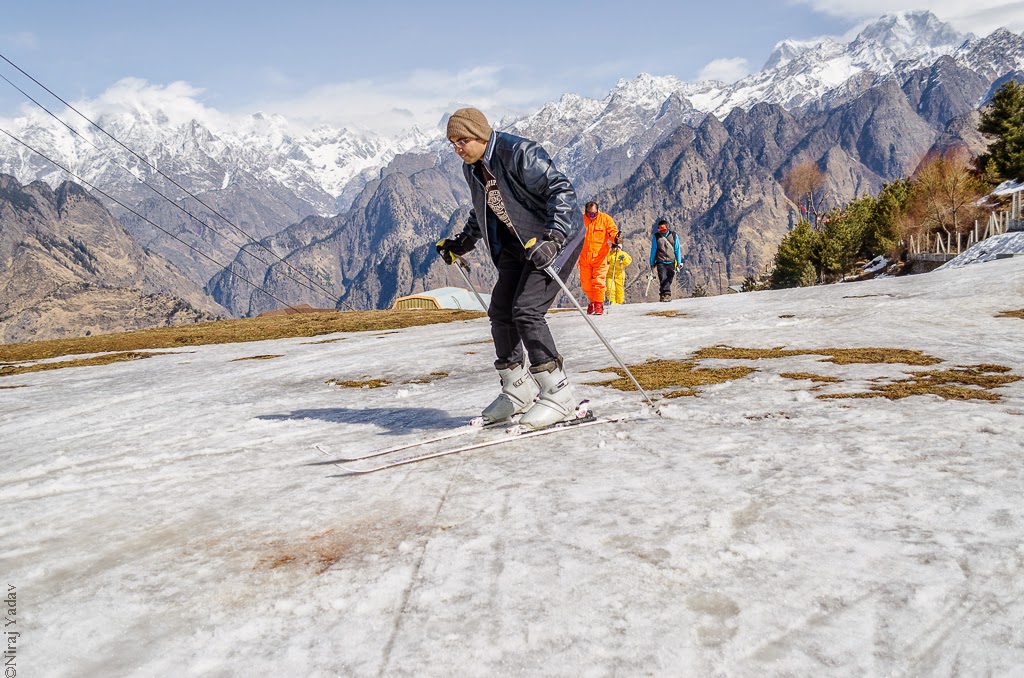 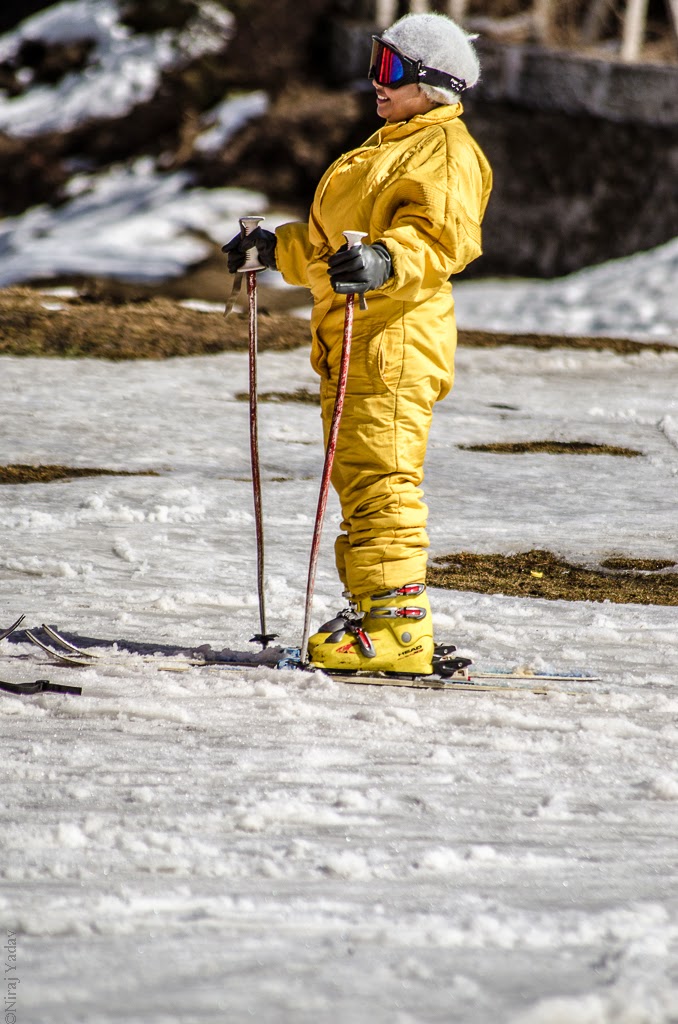 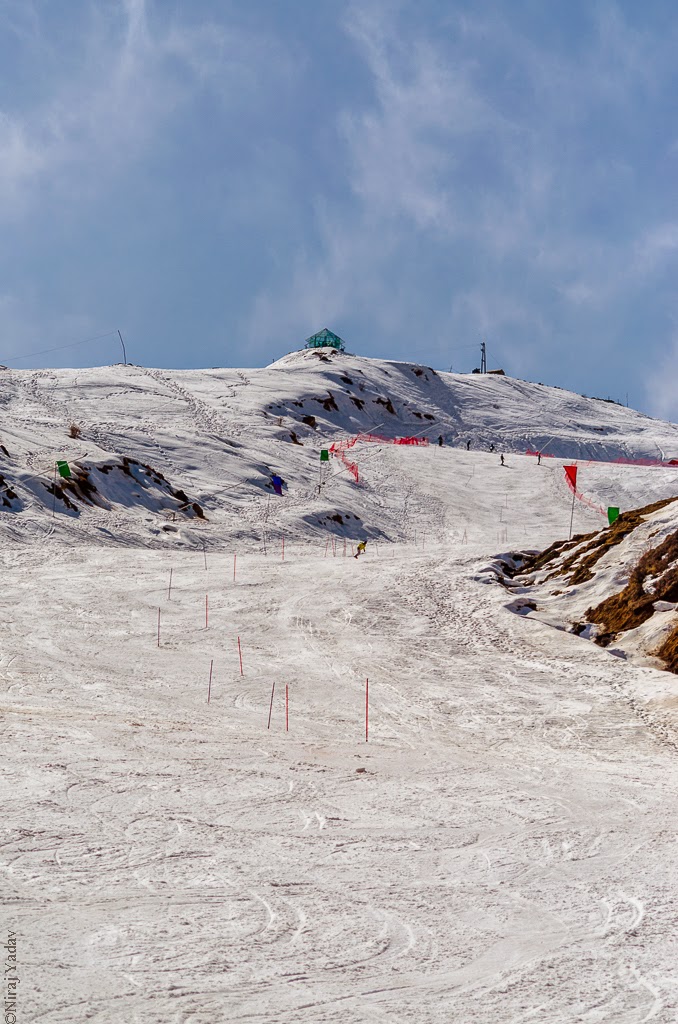 Purchased ticket for the ropeway to get up on the slope. The ticket price was Rs. 350. It was valid to and fro. There are two ropeways in Auli. 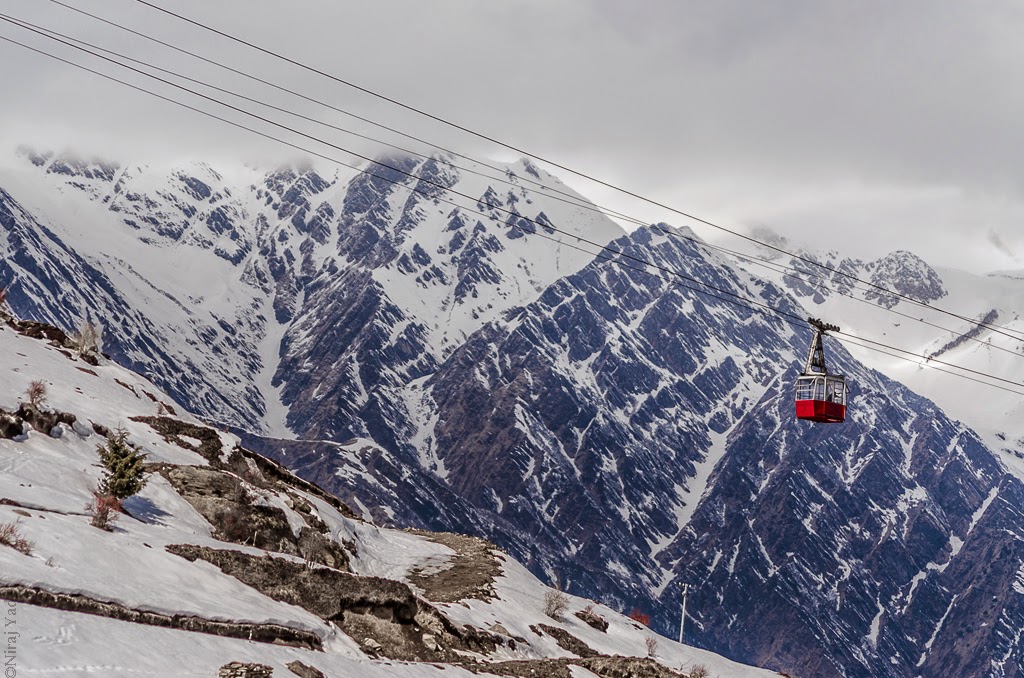 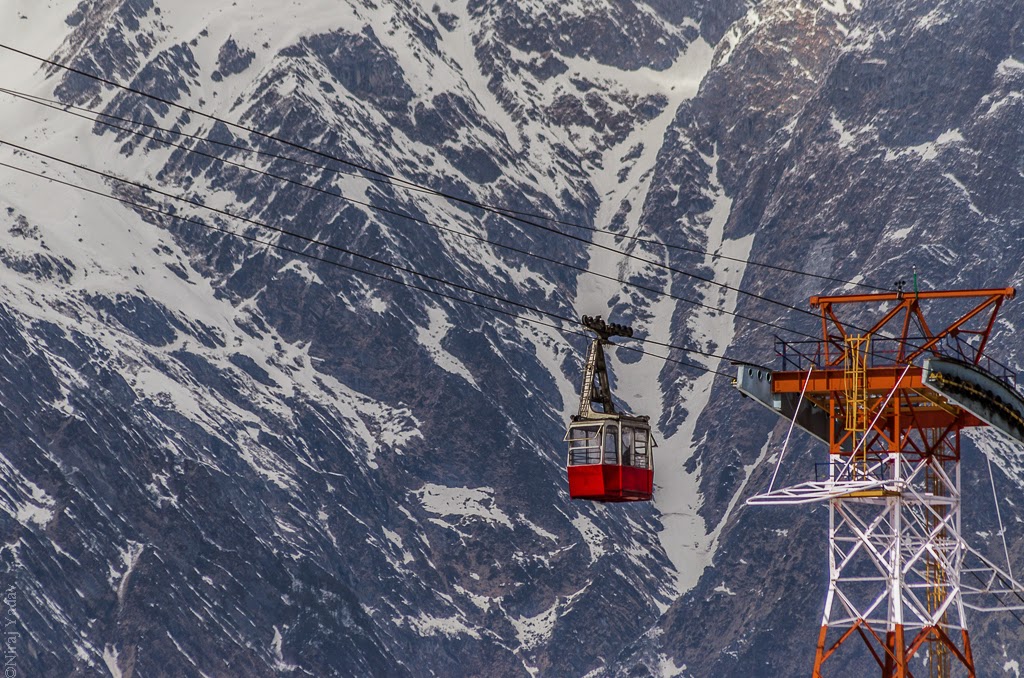 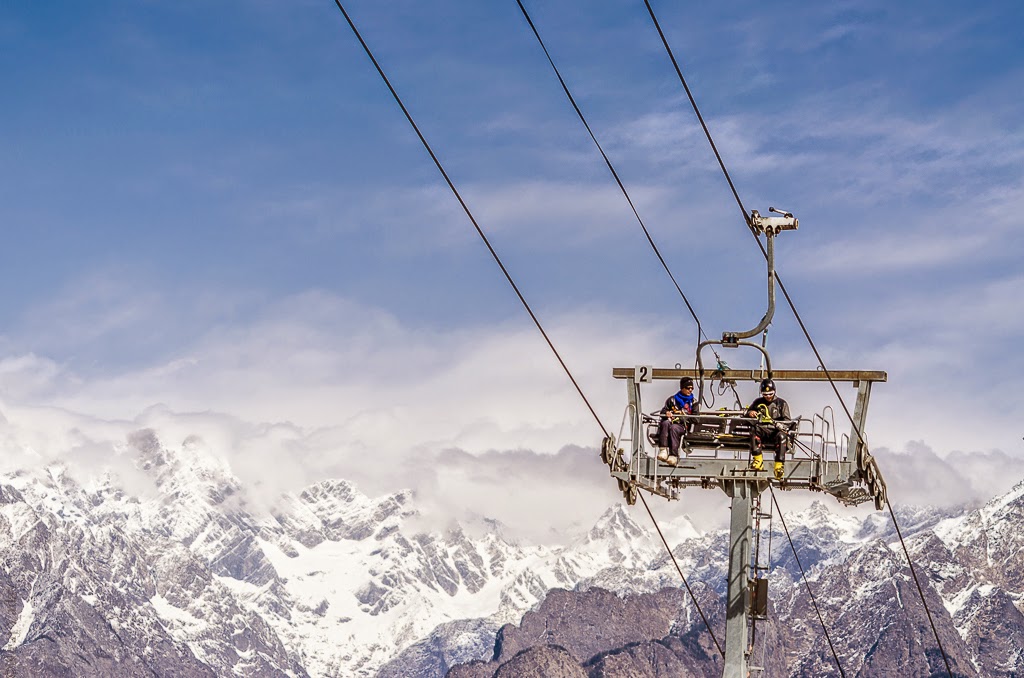 Auli ropeway – Skiers use it get on top of the slope 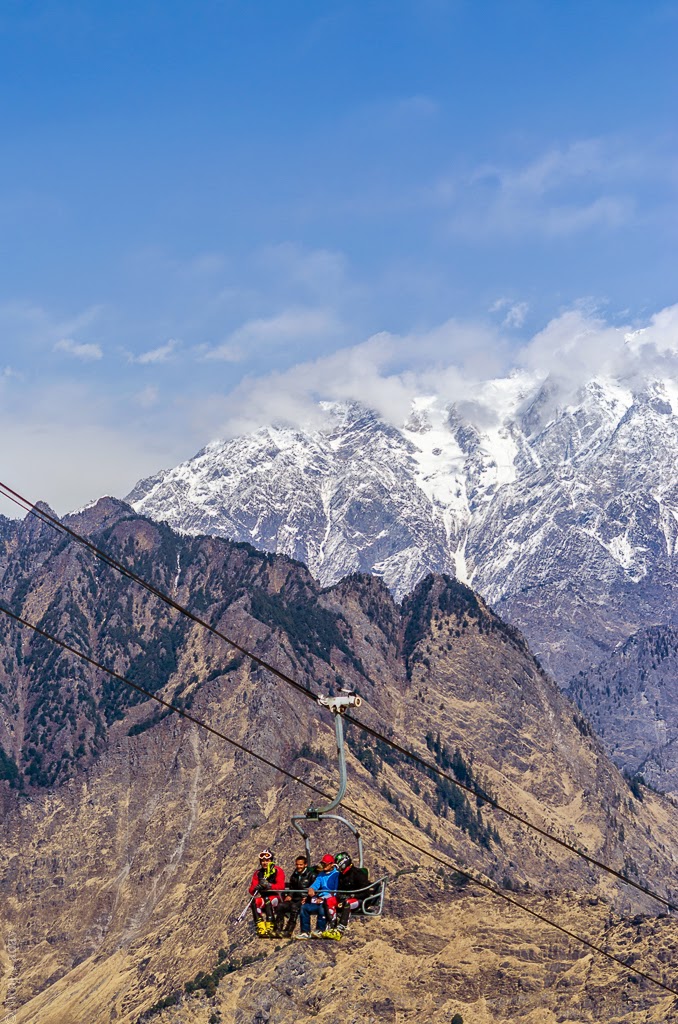 View and experience of the ropeway is amazing

Coach offered me rubber shoes to walk on snow. Auli has an artificial lake on the top of the slope. It was completely frozen. 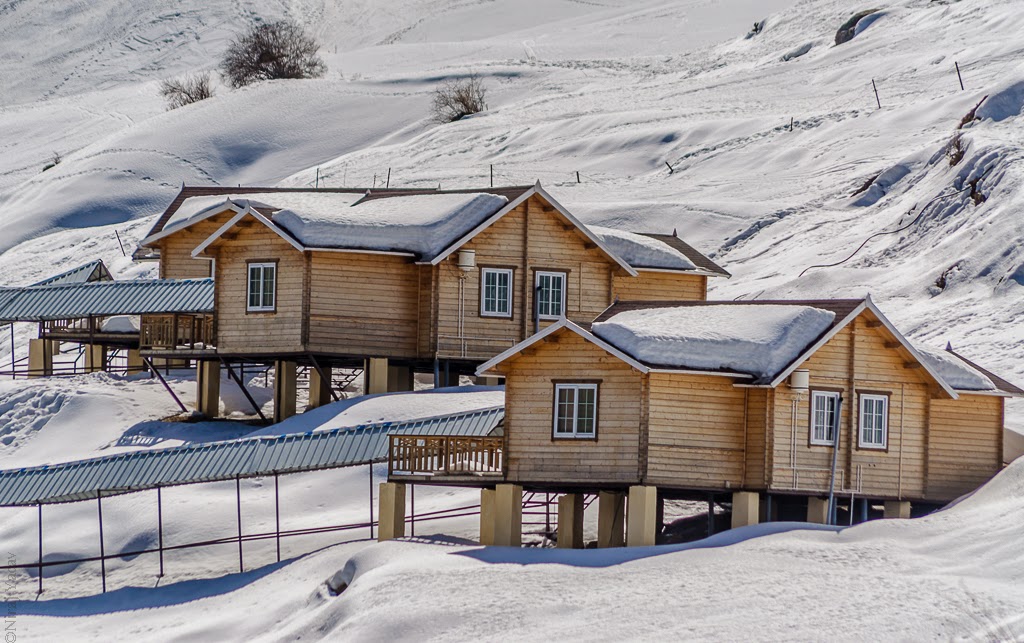 A wider view of Auli ski resort during winters 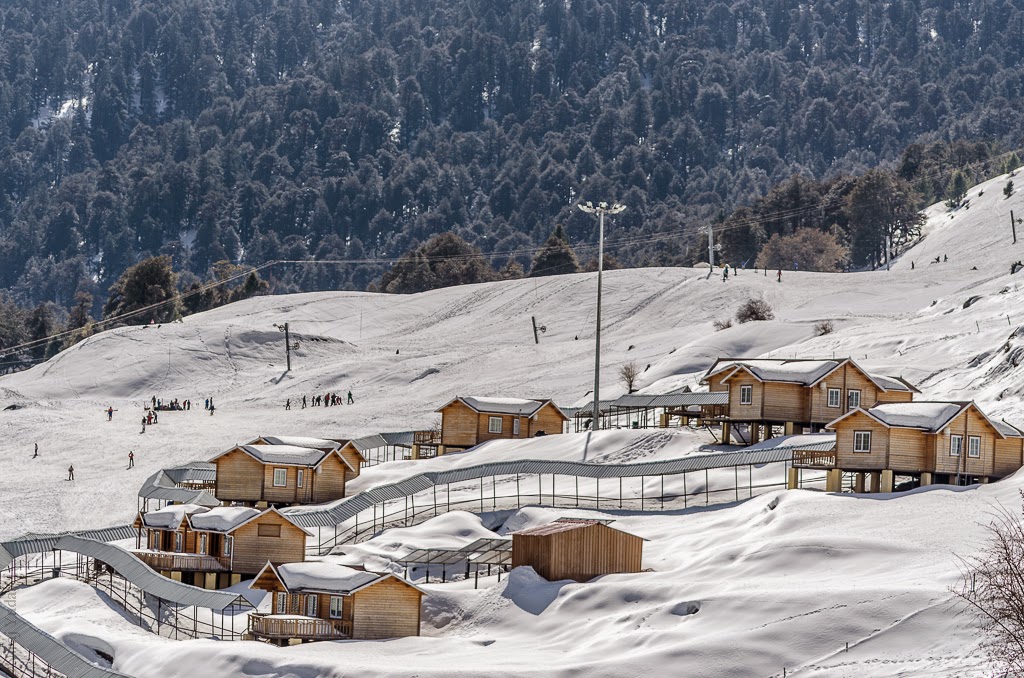 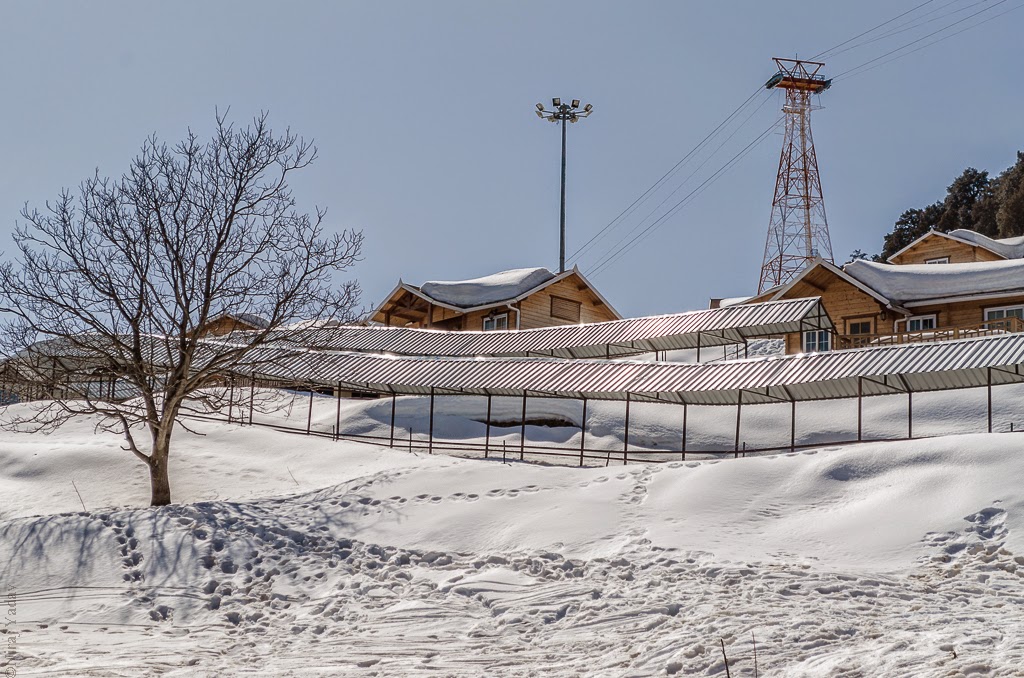 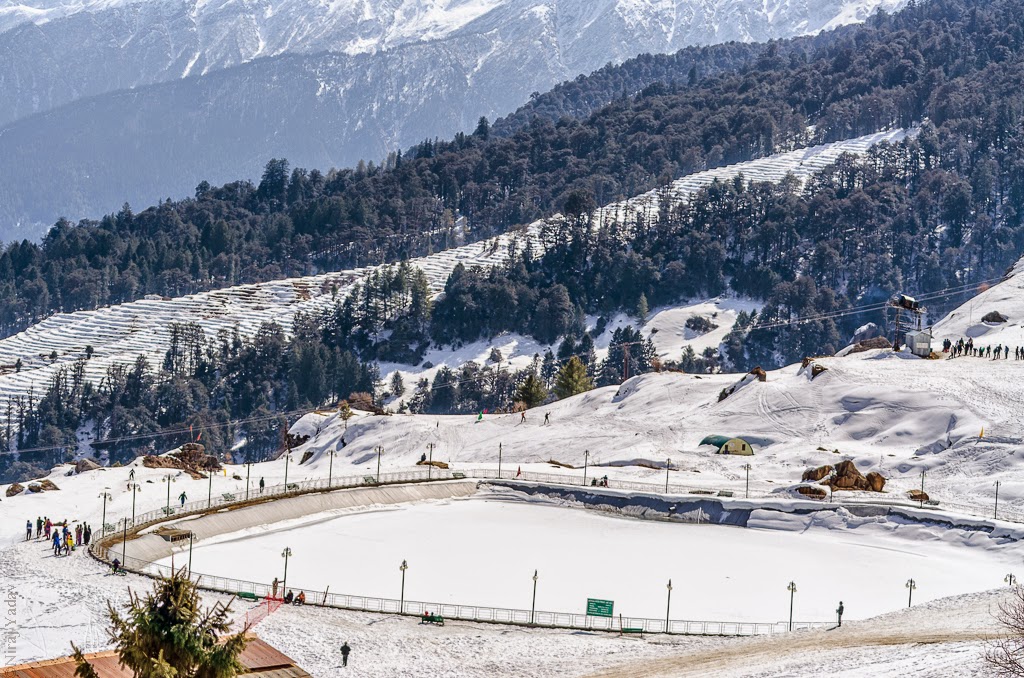 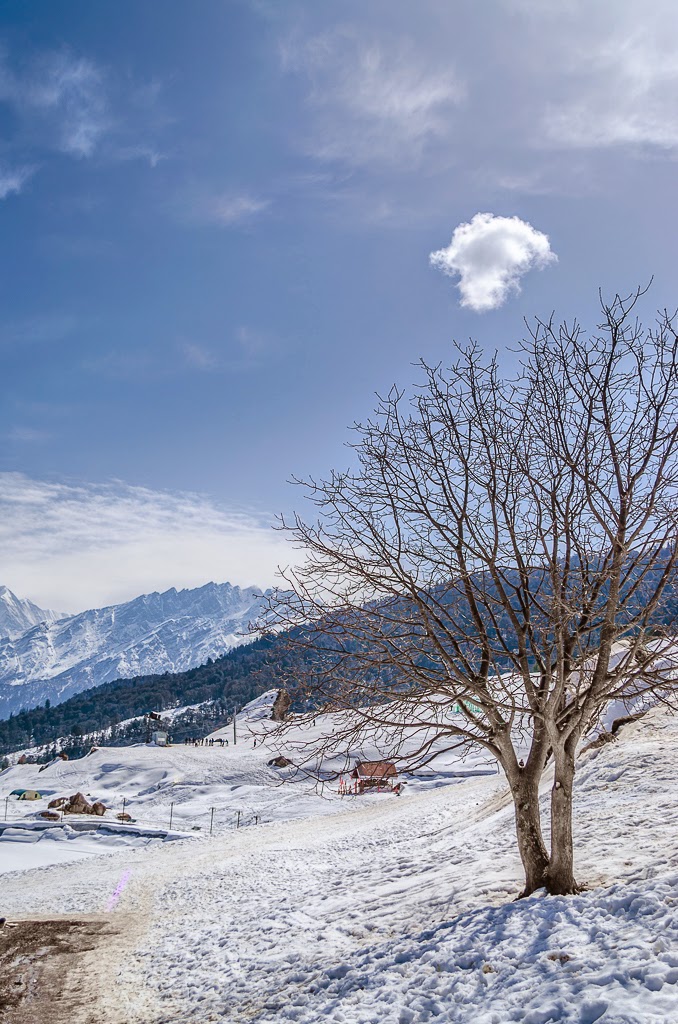 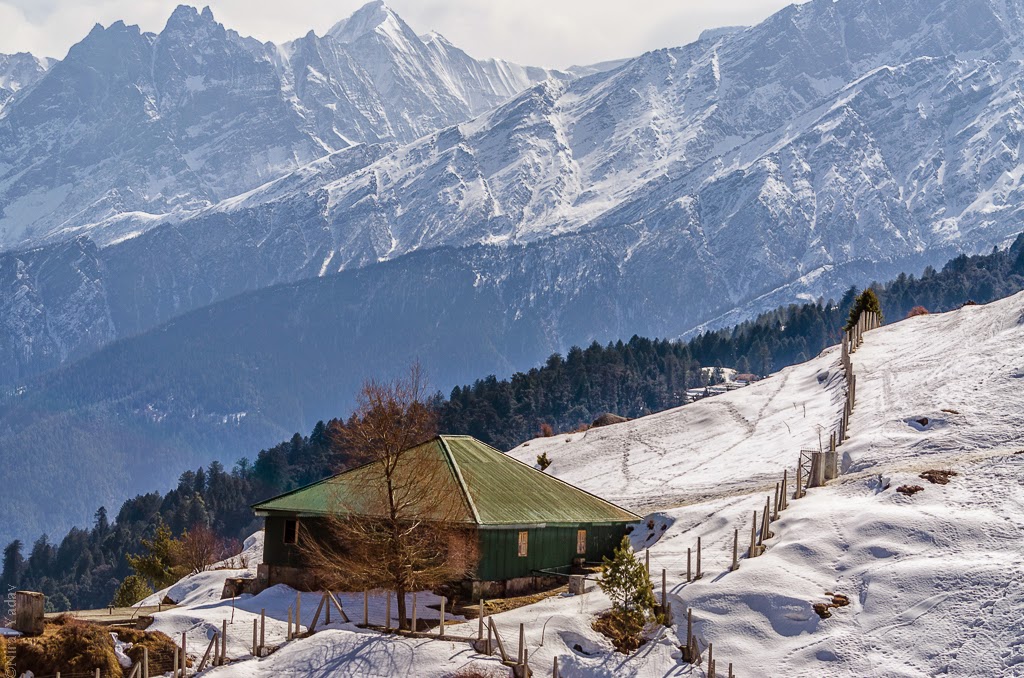 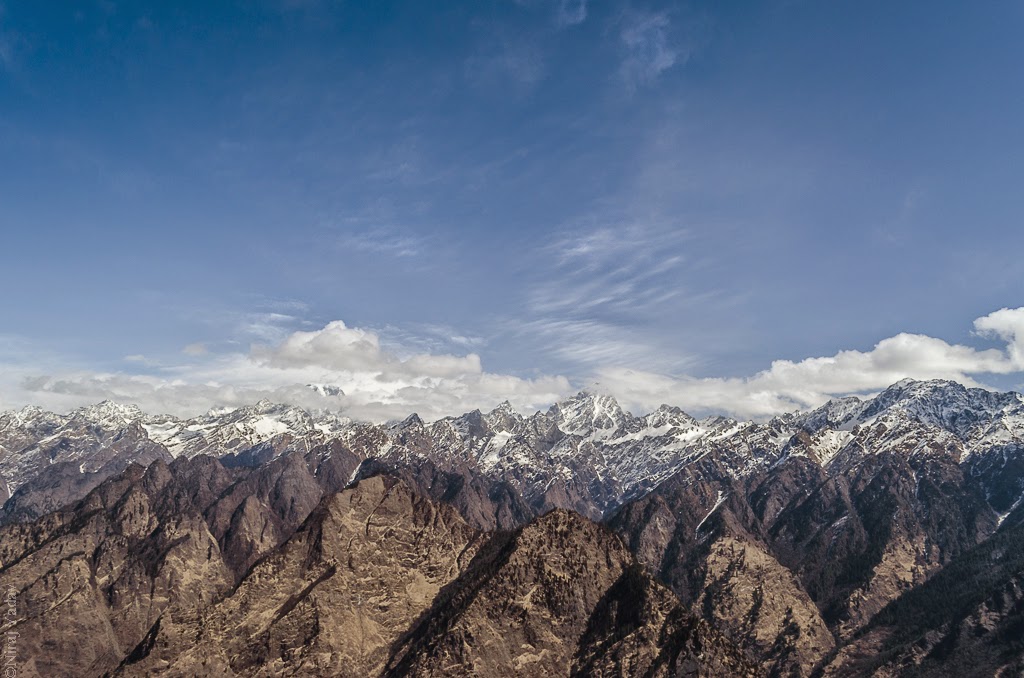 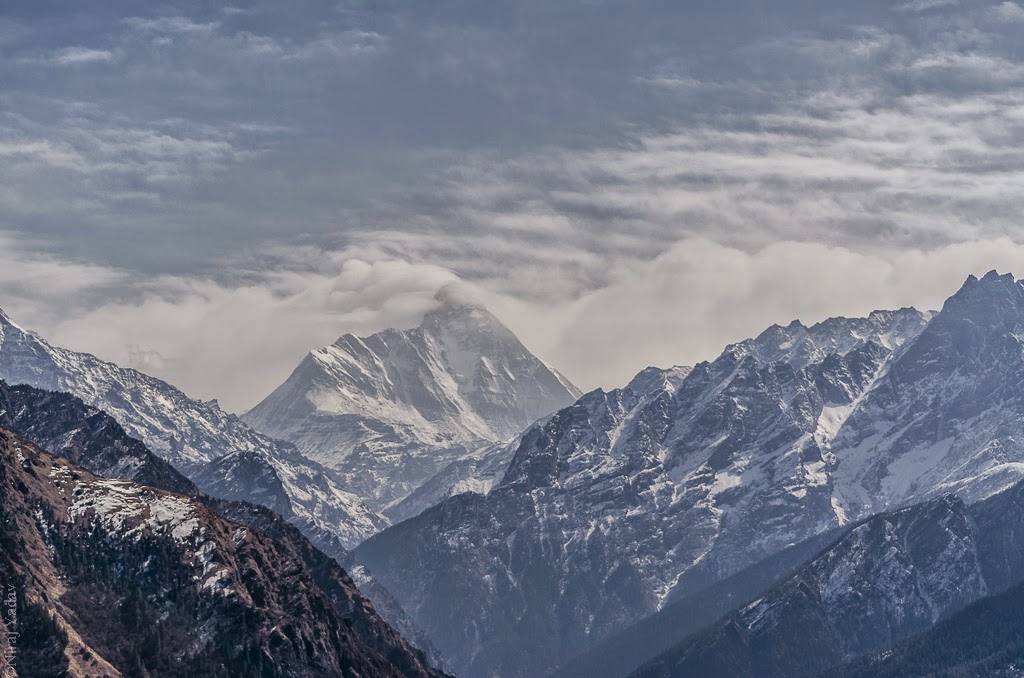 Mighty Nanda Devi in the center

Spent some time walking around the lake and started my return journey. Bid goodbye to the shop owner Deepak (08650496857) and left Auli.

While returning an ITBP jawan asked if I can drop him to Joshimath. I said I don’t have any problem. I asked ‘girne se dar to nahi lagta?’ He said ‘Ji nahi. gir gaye to phir uth jaayenge’. That’s like an army guy.

Dropped him near Joshimath market at around 2:30 PM. I was on schedule. Packed my stuff and proceeded to GMVN, Gopeshwar.

Today it was Mahashivratri. Gopeshwar was bustling with activities. People had flooded markets. Chat wala, khilaune wala, Ice cream wala were busy tending queues of customers. It seemed like a movie scene.

Checked into GMVN. I had the whole of the dormitory. Slept early after a nice warm bath.

Tomorrow was going to be a tough day. I had to Trek Deoria Tal from Ukhimath. But before trekking, I had to reach Ukhimath GMVN and selecting the route to Ukhimath was getting difficult.

If it had snowed too much, the shorter route via Chopta would be blocked. In that case, I had to take the longer route via Rudraprayag.