Yesterday’s tiring ride from Rishikesh to Gopeshwar resulted in a nice peaceful sleep. Opened my day with a shivering bath followed by packing and loading.

Tying ropes in a winter morning is what I don’t like. It was around 7 AM, I came down in the GMVN restaurant to appreciate a hot cup of tea in the winter of February.

Finishing tea geared myself and left the GMVN. Avenger started with the first hit of self-start. Didn’t faced any cold start problem throughout the journey.

Reached Joshimath around 12:00 in the afternoon.
Just as I was to start for Badrinath scene changed and dark clouds hid the mountain.

It started drizzling and finally raining. I took shelter under a military ration building. 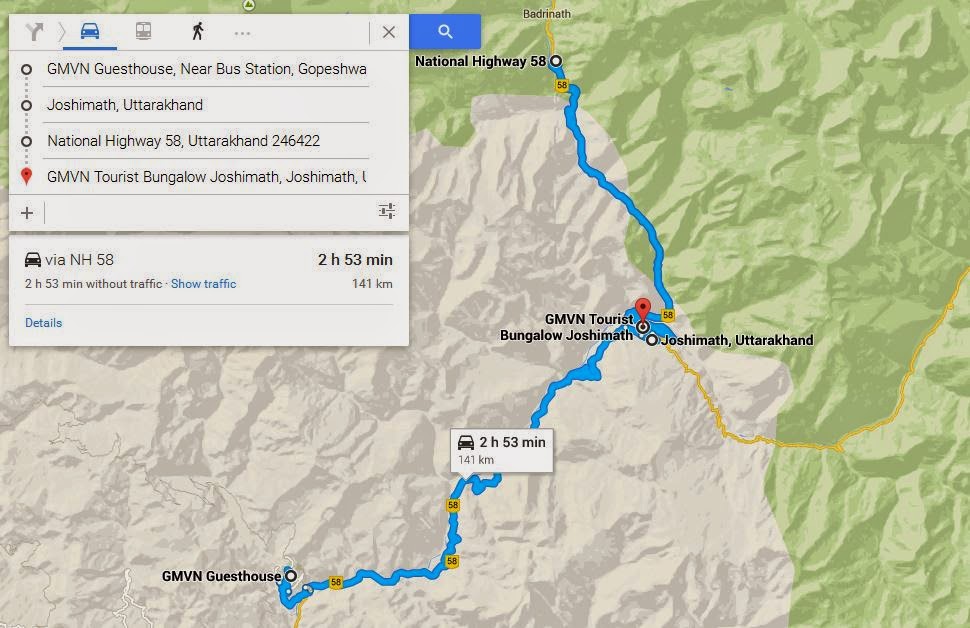 Route I followed from Gopeshwar to Pandukeshwar and back to Joshimath 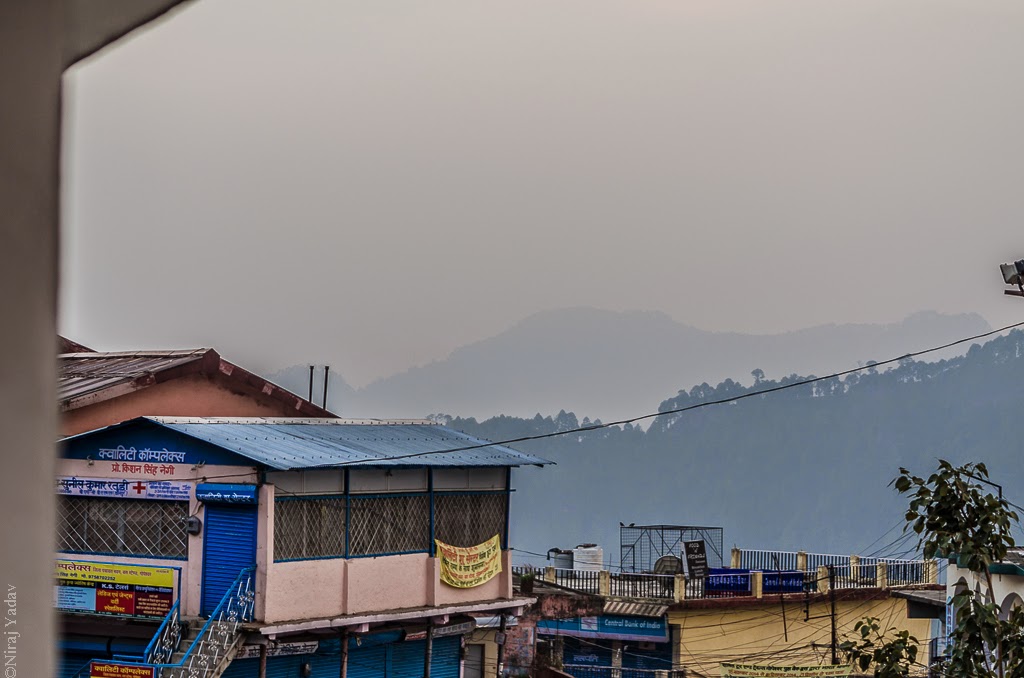 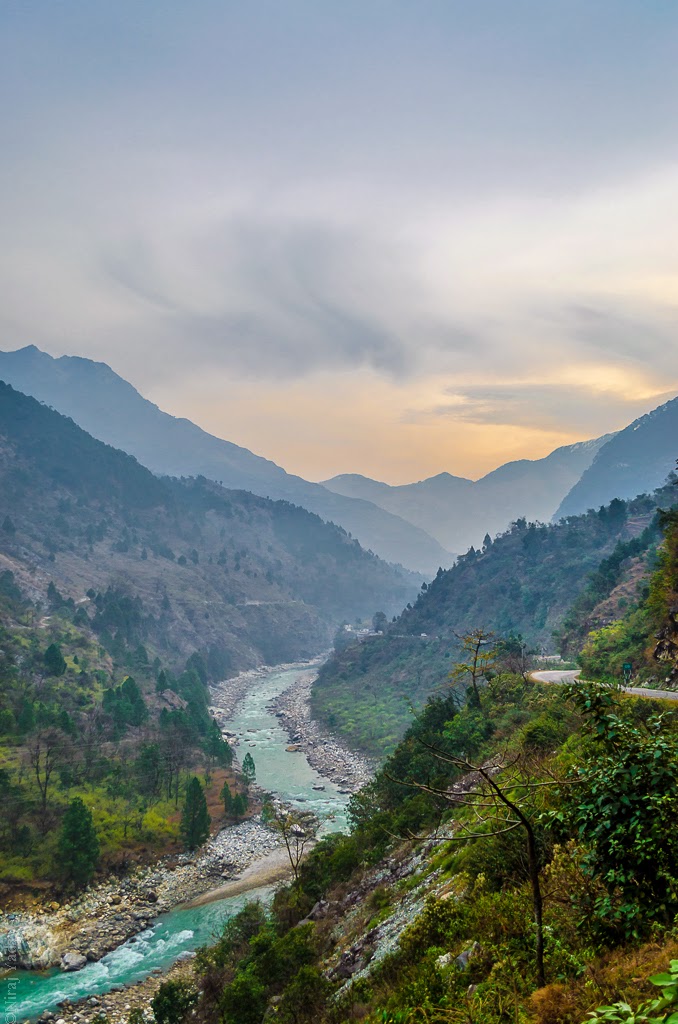 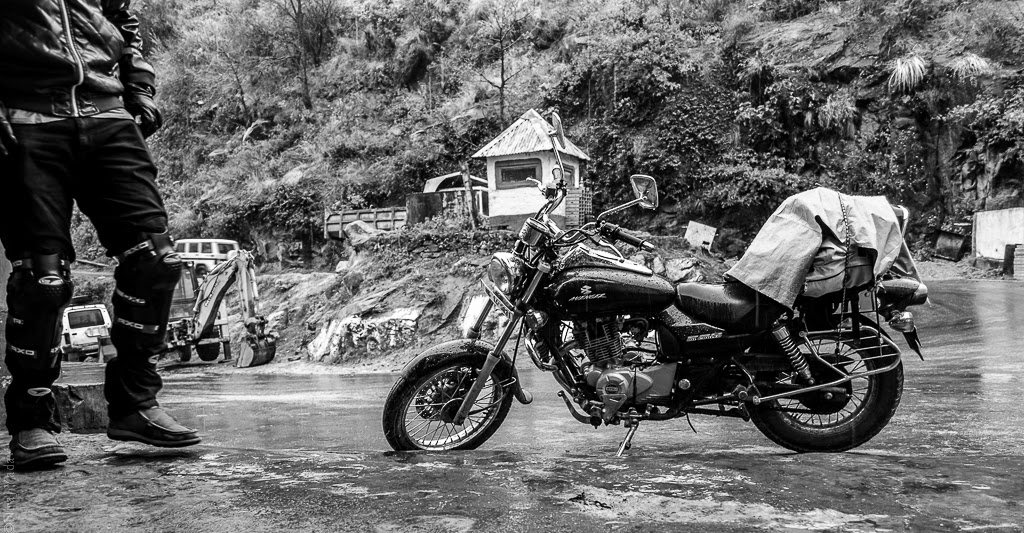 Playing with time and timer 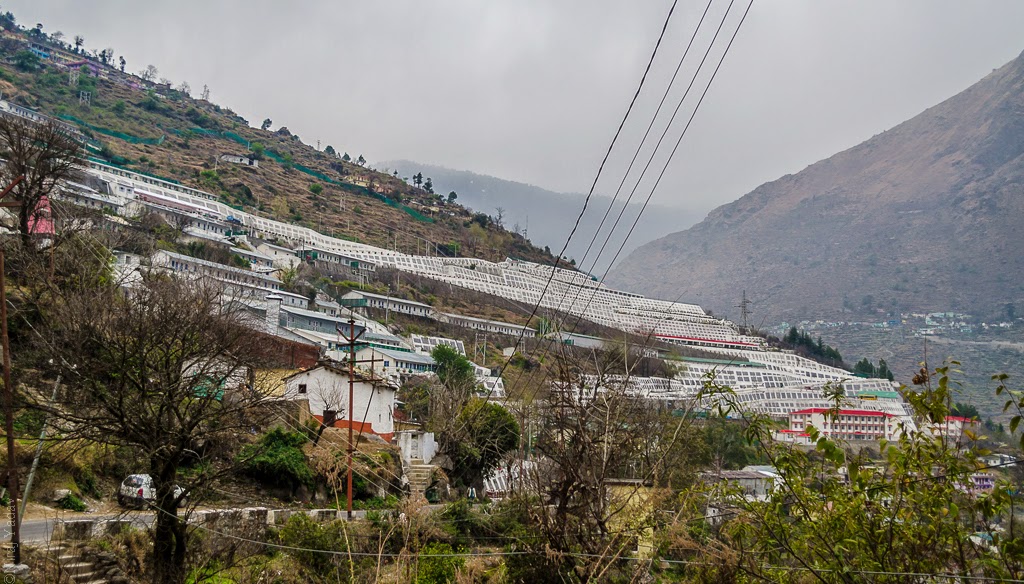 Better you return from here

Two men jumped from a truck which came from Badrinath direction. One guy who seemed army guy very strongly suggested me to return from here.

He said roads are bad from here. Chances of getting stuck there are huge since it is raining. They were back just now and it’s not at all good for a biker that too alone. You won’t get help either.

I kept quiet. I was ready to take chances. I don’t fear being alone.

His assistant was silent for all these 15 minutes. He started repeating same words when the first one went inside. But I diverted him by asking questions. From where did he come? What did he do here?

He was standing wearing a long gumboot loose shirt and a worn-out trouser. It seemed he was engaged in some kind of hard labor work. He spoke with a true smile which made his normal words sound funny.

He belonged to a poor farming family in Jharkhand and he was here in search of employment. ‘हम चट्टान तोड़ते हैं सरजी।’ he smiled and spoke.

I asked where all have you been? He said Mumbai, Delhi, Hyderabad, Indore, Ludhiana, Imphal, Jammu, Goa, Sikkim, Himachal. A true wanderer indeed. But he loved Nagaland and Malari which is 80km from Joshimath the most.

Malari remains under snow during winters and these people are first to go there and open the roads. Either using JCB or blasting the ice. Kida Jadi. He said it’s very costly.

As the winter comes to end local folks run back to their homes in Malari and start searching Kida Jadi. It resembles worm but actually it is kind of plant. Kida Jadi is valued at rupees 4 lakh per kilogram.

Rain slowed down in 1 hour and by the time these people were gone. Started my bike and left the place. 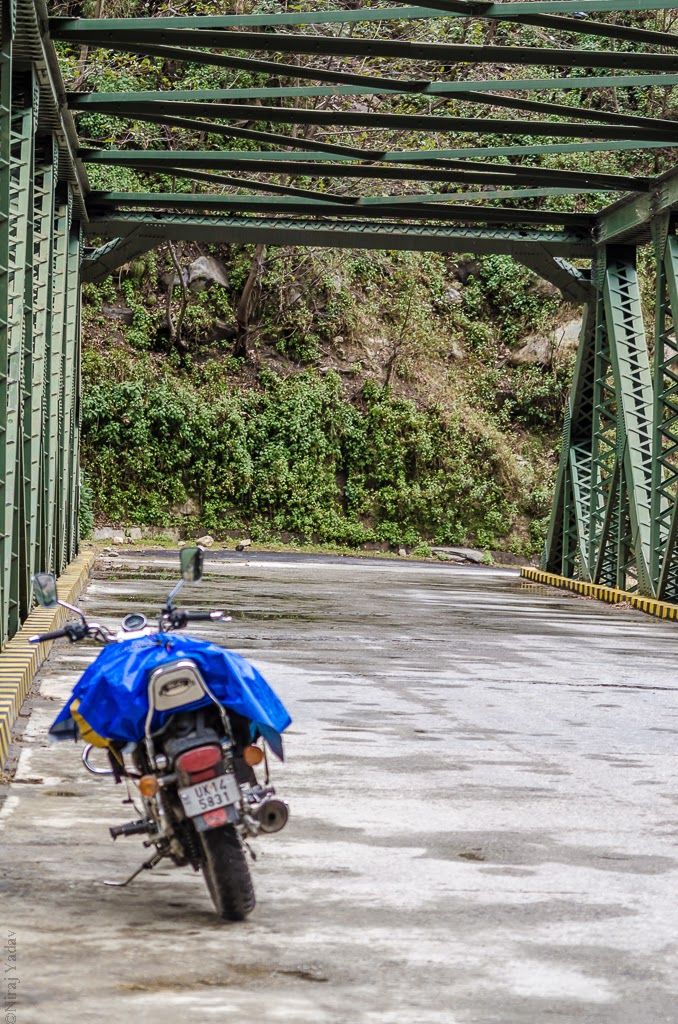 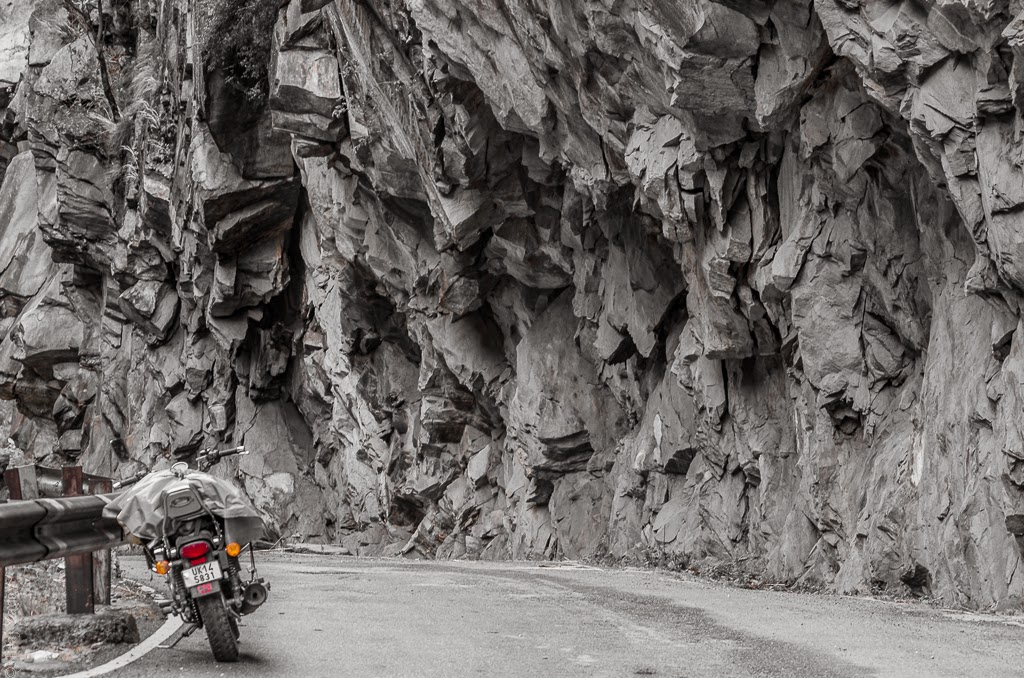 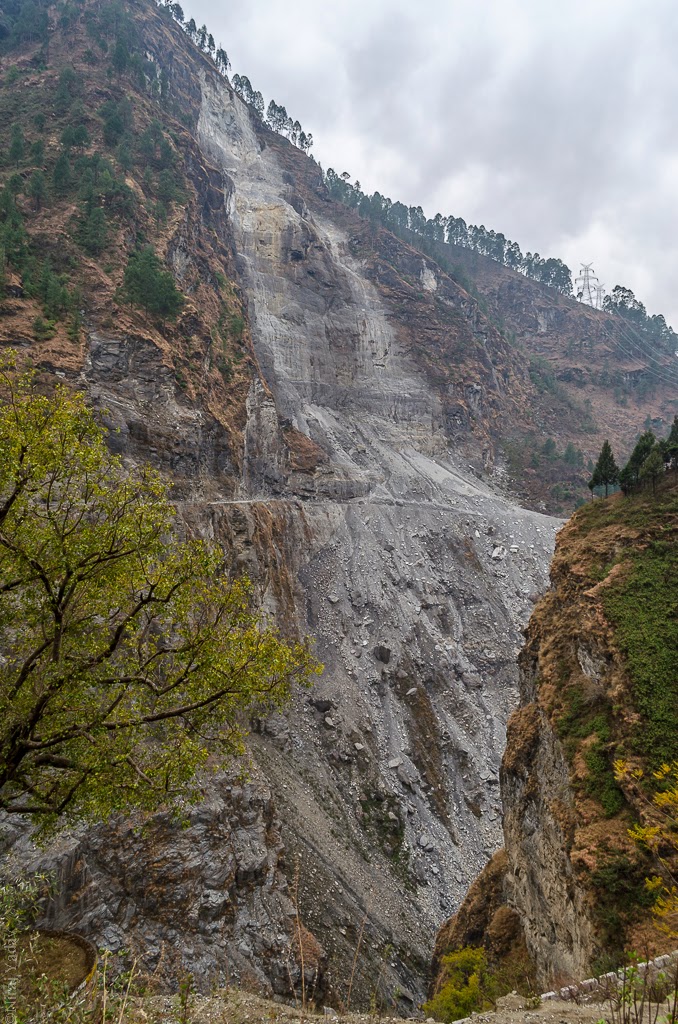 One of the landslide zones en route Badrinath 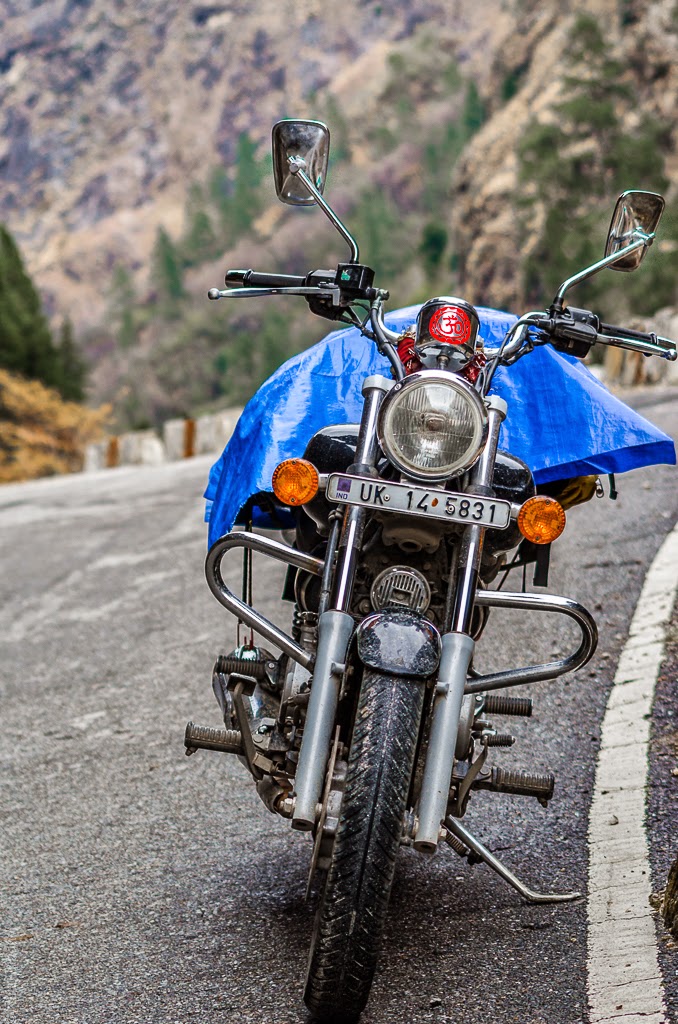 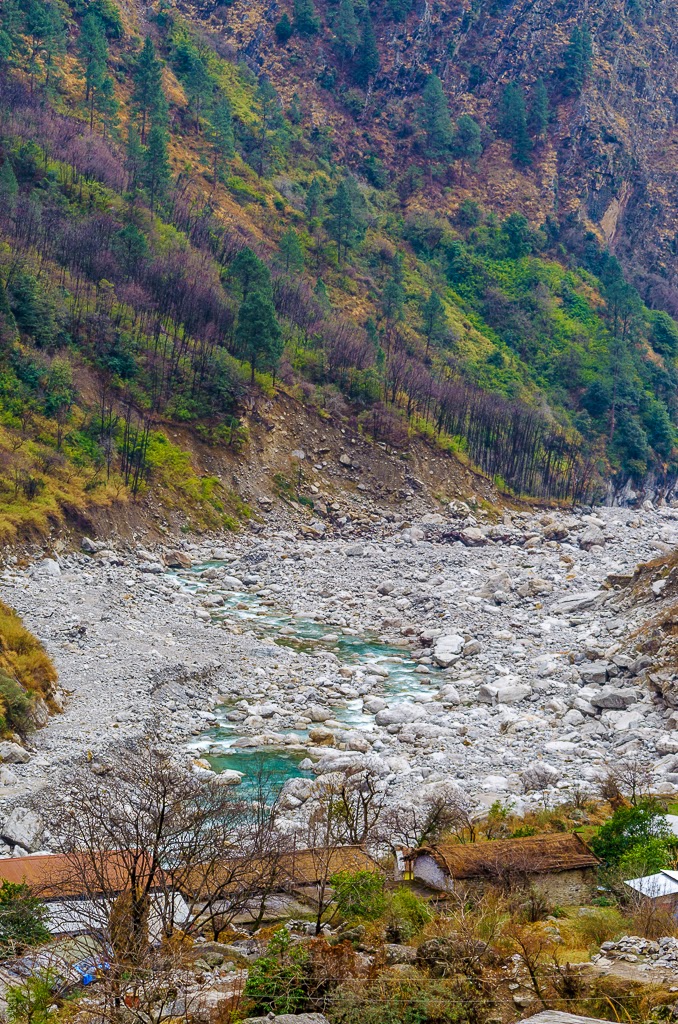 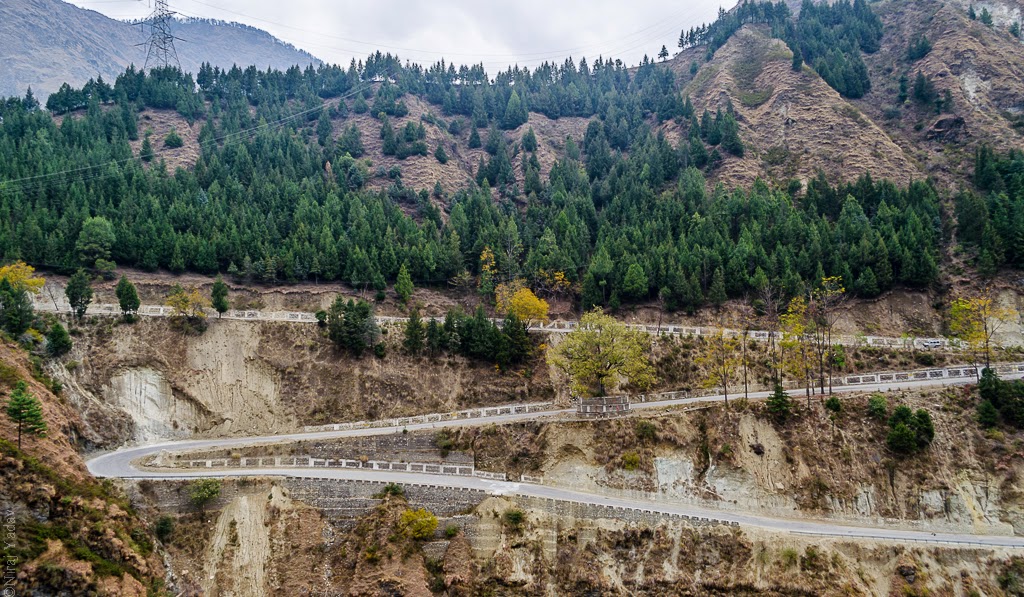 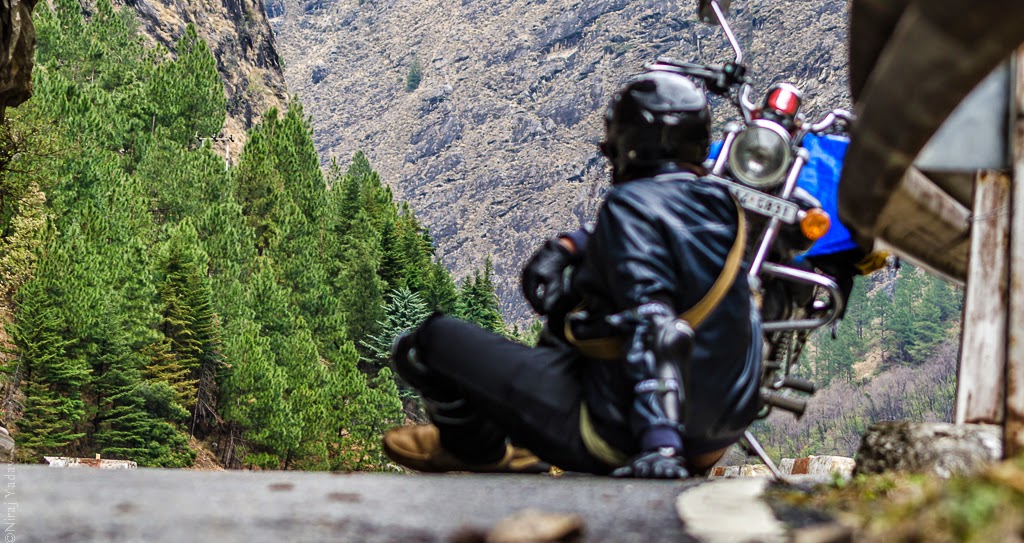 Playing with time and timer

Glacier came down just 3 days ago

On moving ahead, I noticed white substance filling the valley between two mountains. It was not as white as snow. On a corner of the road, saw a boy standing in front of a small temple. He accepted my request to click my photos.

He was from Jharkhand and was positioned here to keep a watch on the JCBs. Pointing at the white substance, he said this is a Glacier. It came down 3 days ago. And the interesting part is these Glaciers give a sort of warning alarm in the valley before coming down. This gives the necessary time to evacuate the path of the Glacier. 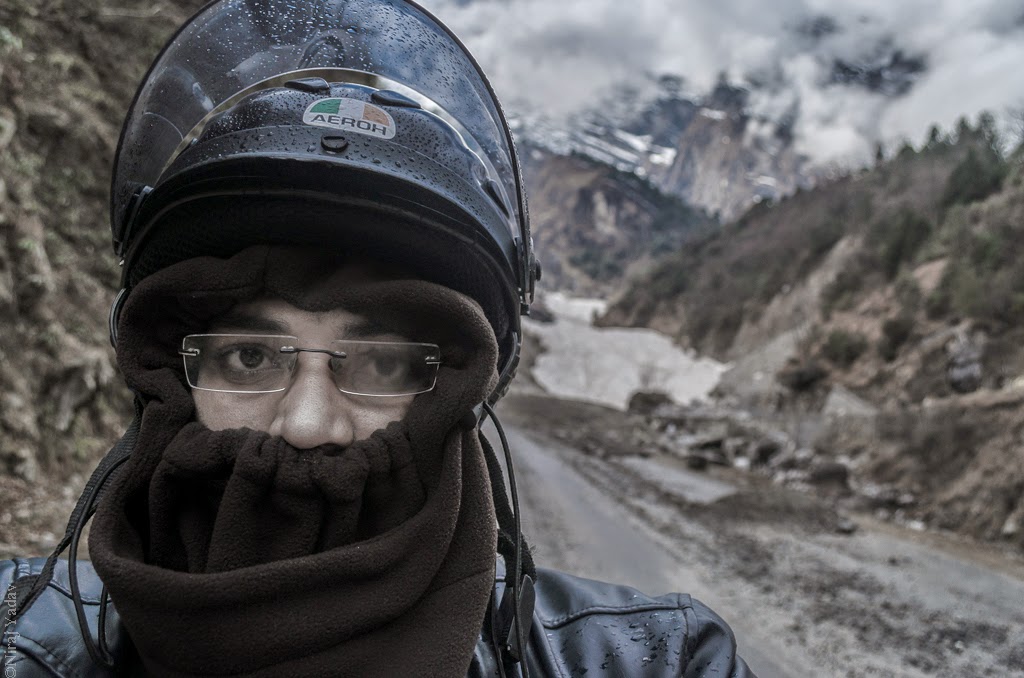 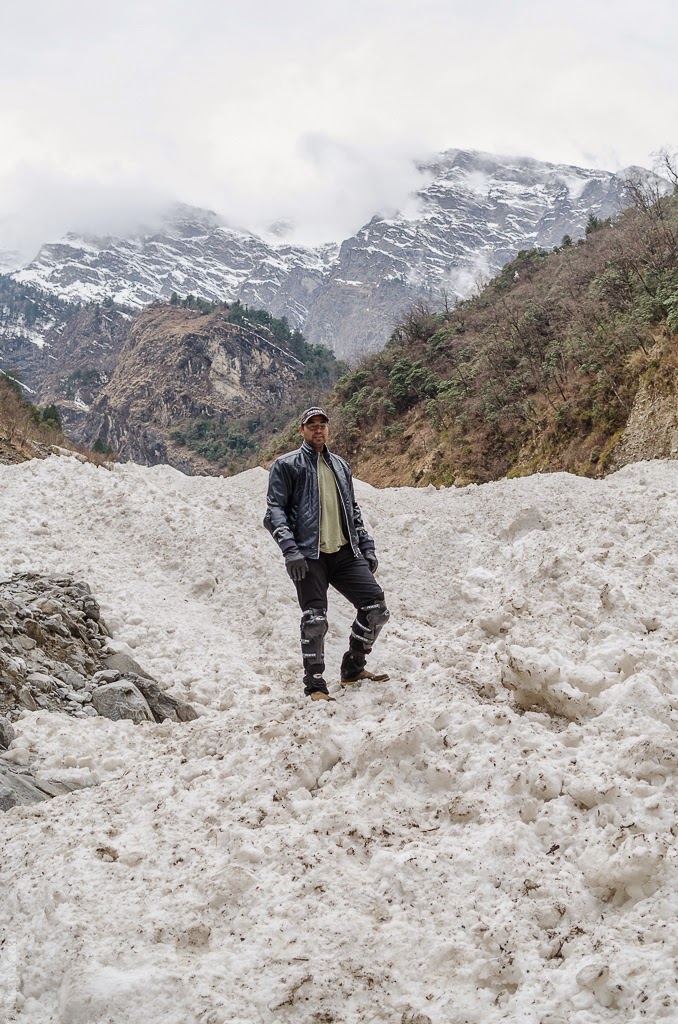 The Glacier will came down 3 days back 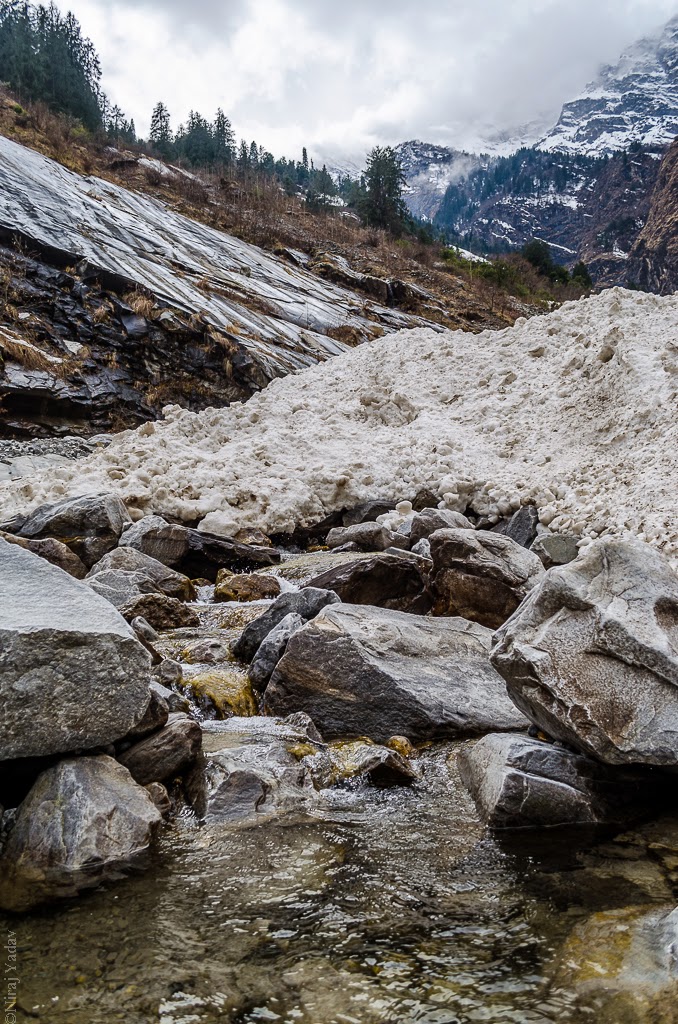 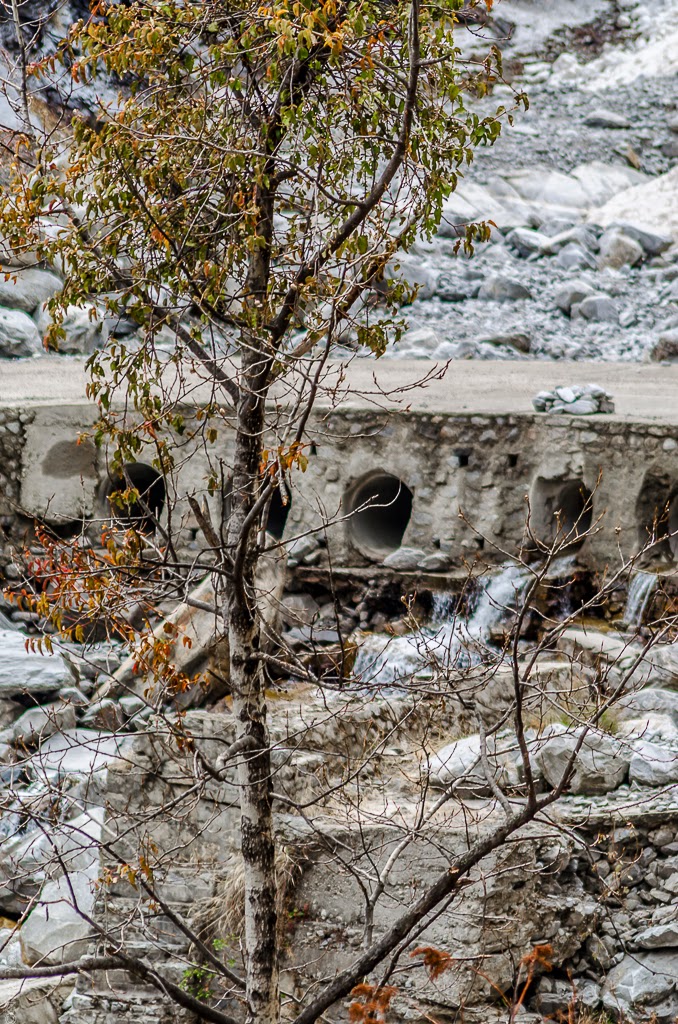 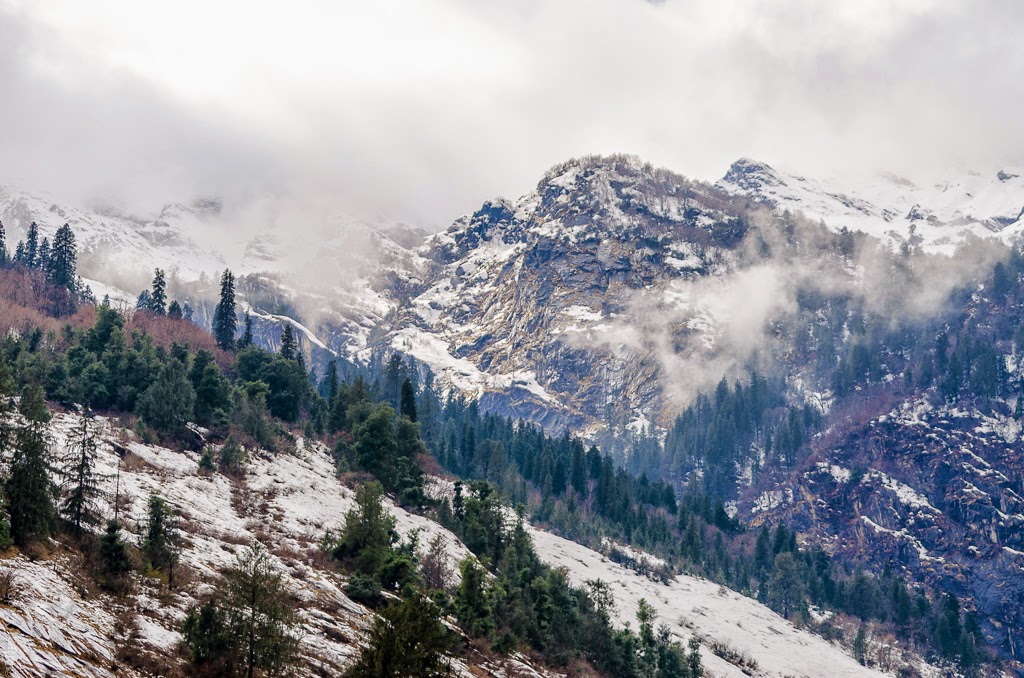 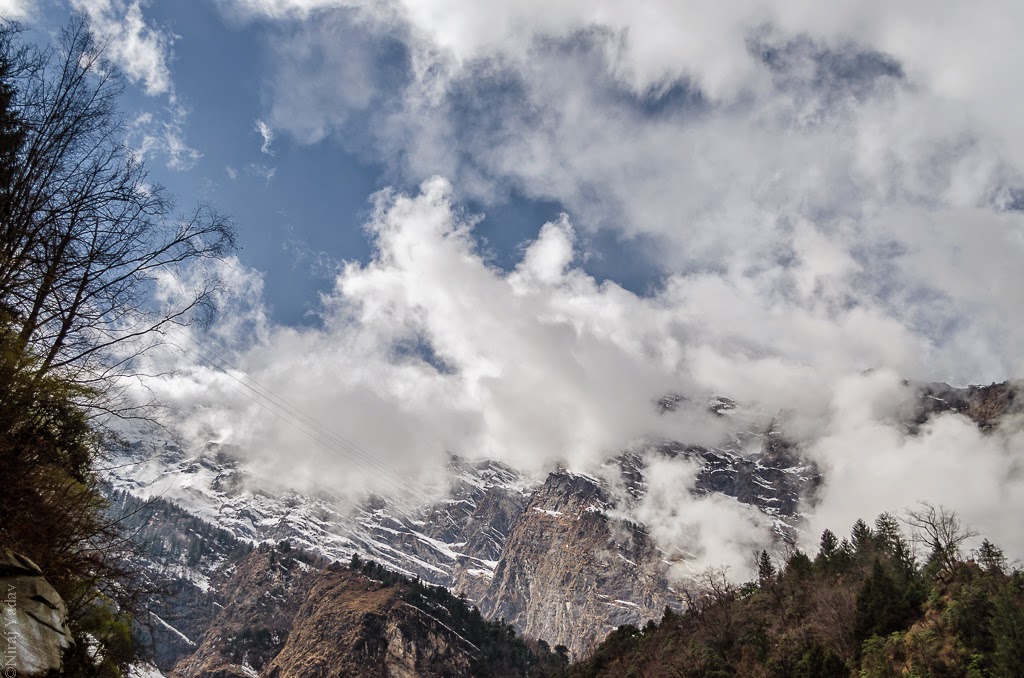 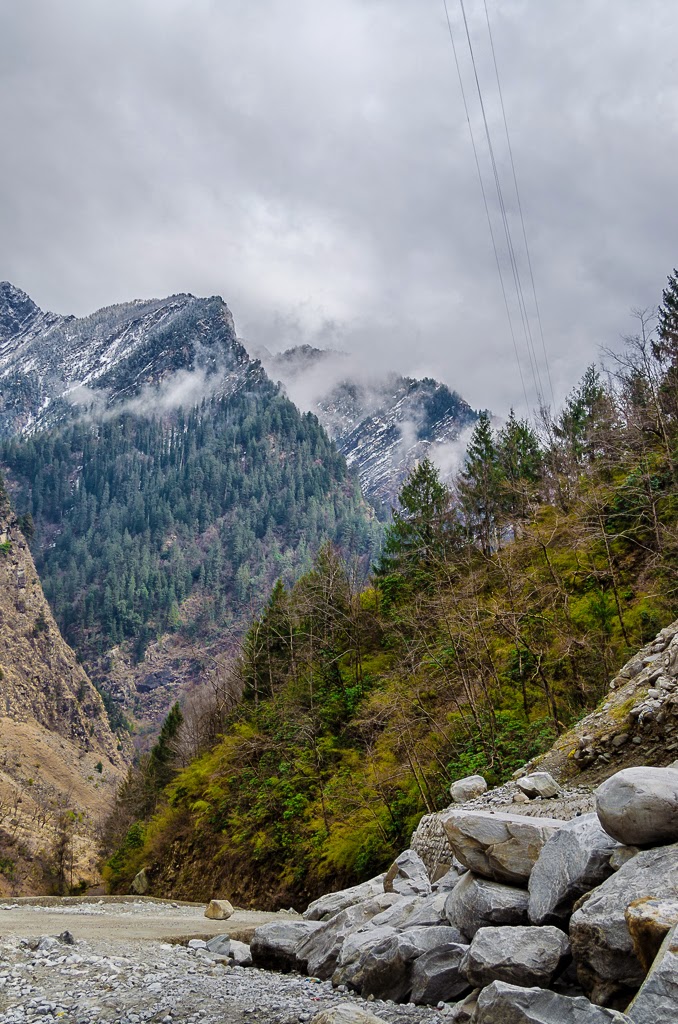 Bidding that boy a goodbye I moved further. My journey ahead stopped at Lambgadh village. I was informed that road ahead is covered with 2 feet snow. I had no option other than to return.

Returned Joshimath and went to GMVN Joshimath tourist rest house. Placed my luggage in the GMVN dormitory, I was alone here too 🙂  After a quick bath went to Joshimath market.

Joshimath is good enough town. Shops are placed on both the sides of the straight long road. Petrol pump is at the end of the town on the Badrinath route. Roads to Auli and Malari goes through Joshimath.

During winters, Badrinathji’s idol and palki are shifted in Joshimath.

The market was bustling with people. I saw a board which read Pure Vegetarian. I was surprised to see 5 grilled chickens hanging.

Spent my evening walking on the streets of Joshimath and watching the local life.

Planned for tomorrows ride to Auli Ski resort and took off for the day.