Before starting the travelogue I would like to introduce myself a little. Describing myself I am not the one zipping and speeding at 120kmph.

I respect machines and believe motorcycles are best when it comes to exploring places. It balances the fuel and fun well. I term myself as budgetyatri. My bike trips are extremely cheap but equally meaningful and I feel good about it. I prefer basic accommodations and eat what the locals eat.

I never rush towards my destination as doing so do not let us enjoy the journey. I like to connect those small dots enroute and make a final picture of the journey. Lets start..

The Himalayas always fascinated me. I used to wonder of huge mountains and greenish rivers slipping through the deep valleys. I dreamed of shining snow clad peaks standing one behind another and locals busy in their daily routine walking up and down the mountain.

Literature’s of mystical Yogis wandering in the Himalayas in search of ultimate truth always motivated me. Somewhat with the same intention and to see if I can stumble upon such mystical Yogis this trip was planned.

Itinerary
Mumbai to Haridwar by train.

Packing
Recommended for bike trips in Uttarakhand. Items may differ for other mountainous regions.

Mumbai to Rishikesh [Argument with Sanyasi]

This part was quite eventful. Sleeper coaches were always happening for me. Golden temple mail was crowded as usual. 12-13 army recruits seemed from Haryana boarded from Gujrat and filled whatever space was remaining around.

Their shouting and gali galauj stopped when a well built Sanyasi more like Pierce Brosnan came and sat near us. Shortly one-quarter of the coach was attracted with his voice and gathered around us. I was listening to him too.

But he kept speaking about the problems. We all knew what sort of problems we have as an individual and as a citizen. In between, he said good people should not run to earn and accumulate wealth. I interrupted him. I said there is nothing wrong in earning wealth. In fact, this is what the dharma of Grihastha (married) is.

He was hesitating to accept. People started supporting me. Then a good round of discussion started which ended in an argument. He left the seat and never came back. He came across me outside Delhi station. I passed a smile but he didn’t care to smile back. I laughed and went on …

I met another interesting guy a nuclear scientist from Bihar. Very simple and shy. He worked at Rawatbhata nuclear reactor in Rajasthan. He went on explaining his training, reactor construction, premises, working of a reactor, fuel supply management, storage, new inventions and many secrets advising in last not to share.

This is the easiest transport from Nizamuddin to Old Delhi especially if you have luggage and don’t know Delhi. Rickshaw took 30 minutes but I was not bothered as the connecting train to Haridwar was at 23:45. Reached Haridwar in the morning at 05:00.

Took another rickshaw for Rs.100 from Rishikesh bus depot for Laxman Jhula which is 5km far.
I was to get my mobility from Mountain Fox Adventure, Hrishikesh. Called Ashok Ji. He was very prompt to pick up my call at 07:45 in the morning.

He came to his office on Laxman Jhula road and handed over a good Bajaj Avenger. He was quite helpful in negotiating the deal and accepting my request for a good condition Bajaj Avenger. Recommended for bike rentals and other adventure activities http://motorcyclerentalrishikesh.com/ 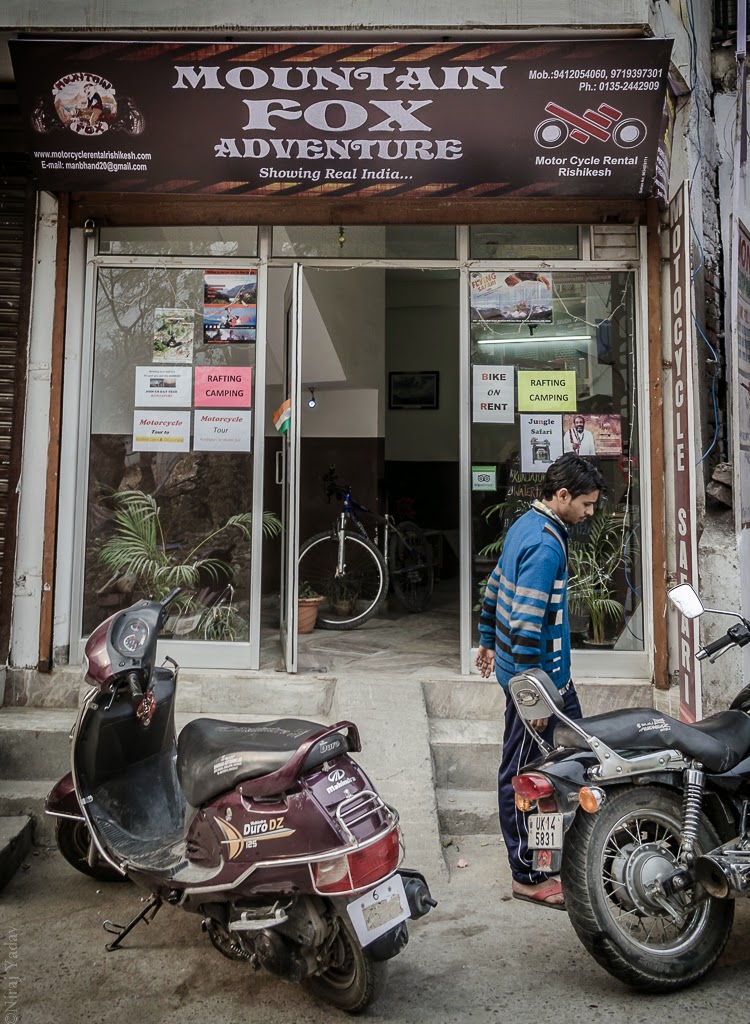